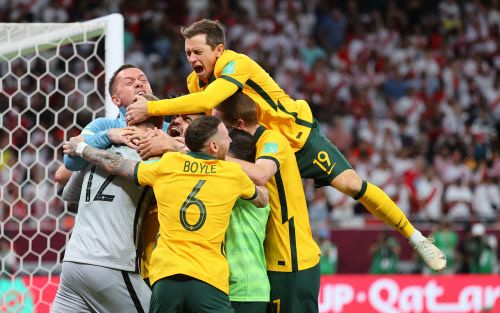 Seoul: Australia’s win over Peru in the intercontinental playoffs this week guaranteed an unprecedented six teams from the Asian confederation at the World Cup, giving the continent an opportunity to repeat the success of 2002 when it first staged soccer’s marquee event.

South Korea reached the semifinals and Japan made it to the Round of 16 when they co-hosted the tournament in 2002, but Asia has under-performed in every edition since.

In the first World Cup in the Middle East, Europe, with 13, will be the only continent with more teams represented.

“This is indeed Asia’s time and there is no better way to underline this celebration than with the qualification of a record six teams at the FIFA World Cup for the first time in our history,” Asian Football Confederation president Sheikh Salman bin Ibrahim Al Khalifa said. He's hoping 2022 will show a marked improvement from Asia's performance in 2018.

With just over five months to go, signs are mixed.

Japan was shaping up as the best hope. A narrow 1-0 loss at home to Brazil on June 6 was sandwiched between 4-1 victories over Paraguay and Ghana. On Tuesday, however, Hajime Moriyasu’s men lost 3-0 at home to Tunisia.

“The result was disappointing,” Moriyasu said, but he added that the friendlies had given him an opportunity to try different formations. “This will help in the future and I will use this as a springboard to improve.”

Japan starts and ends Group E against Germany and Spain with the middle game against Costa Rica, which edged New Zealand on Tuesday for the last of the 32 spots in the draw for Qatar.

Saudi Arabia finished above Japan and Australia in qualifying but lost earlier this month to Colombia and Venezuela, two teams that did not qualify from South America. It leaves Saudi Arabia's opening Group C game against Argentina looking ominous.

“The players are tired after a long season and the coach (Herve Renard) has been trying different strategies and we hope to get the benefit from that,” Saudi Arabia's federation president Yasser Al-Mishael said. The Saudis plan to have six or seven more friendlies. “September’s training camp will be focused on correcting mistakes and preparing for the World Cup.”

Iran has to face England, the United States and Wales in Group B, but the team’s only game since securing qualification was Algeria in Doha on Monday and ended in a 2-1 defeat. The team from Qatar, which has never appeared at the World Cup before, has not seen much international action at all.

The Australians have been up and down. After winning 11 straight qualifying games in the second round and start of the third round of Asian qualifying, the Socceroos registered just one victory in seven games to finish third in their group.

The Socceroos beat United Arab Emirates 2-1 in an Asian playoff last week. Six days later at the same stadium in Qatar on Monday, the Socceroos qualified for a fifth straight World Cup after edging Peru, the fifth-place team in South America, 5-4 on penalties.

The reward is a place in Group D and games against defending champion France, Tunisia and Denmark.

South Korea, appearing at a 10th successive World Cup, started its buildup with a heavy 5-1 loss to Brazil in Seoul on June 2. Results improved as the Taeguk Warriors beat Chile 2-0, drew 2-2 with Paraguay and then defeated Egypt 4-1.

The South Koreans, who beat Poland, Portugal, Italy and Spain on a remarkable run to the semifinals at home in 2002, will be playing in Group H against Uruguay, Portugal and Ghana in Qatar.

“The biggest positive to take is how the players reacted against Chile after the defeat against Brazil and how they fought back from 2-0 down against Paraguay," South Korea coach Paulo Bento said. "We still have work to do.” AP