Bronze for us is as good as gold: Sreejesh's mother 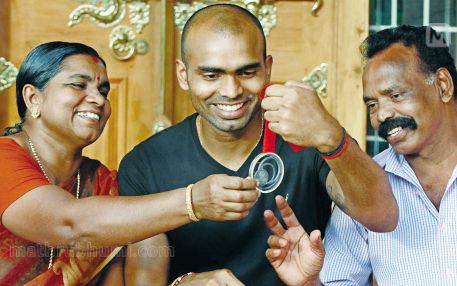 Sreejesh with his family I File Photo I Mathrubhumi

Kochi: Even when India held on to the lead that they had in the crucial clash with Germany in Tokyo, thousands of miles away from there at the house of Indian goalkeeper Sreejesh, it was anxious moments.

And when the final whistle blew, it was celebrations at his house and his mother could not hide her emotions as she said, "The bronze medal is as good as we have won the gold."

"This is his third Olympics and on the previous two occasions, he had to return empty handed. But this time it's not so, he is returning with a medal. Though it is bronze, for us the bronze medal is as good as we have won the gold," said the mighty pleased mother of Sreejesh.

Right from early morning on Thursday, the house of Sreejesh was a crowded one with all glued to the TV.

After the historic win, the entire family celebrated the victory by lighting firecrackers and distributing sweets.

Sreejesh's wife, Aneesha, an Ayurveda doctor also could not hide her emotions. She said it was the desire of Sreejesh to win an Olympic medal.

"And true to his desire, India has won a medal and we just cannot express our happiness. He just called me and when the call came our joy increased much more. He said he might come here on August 10th, but was not sure," said Aneesha.

Sreejesh's father said all he can do is to thank each and every Indian who prayed for the success of Team India.

"Thanks to all for their prayers and this happened because of the prayers of everyone," said his father.

33-year-old Sreejesh on Thursday turned out to be the wall and did not wilt under pressure.

Sreejesh is a former captain of the national side and is presently employed as the Chief sports Organiser with the Kerala Education department.

He presently plays for Uttar Pradesh Wizards in the Hockey Indian League and in 2017 the country decorated him with a Padma Shri.