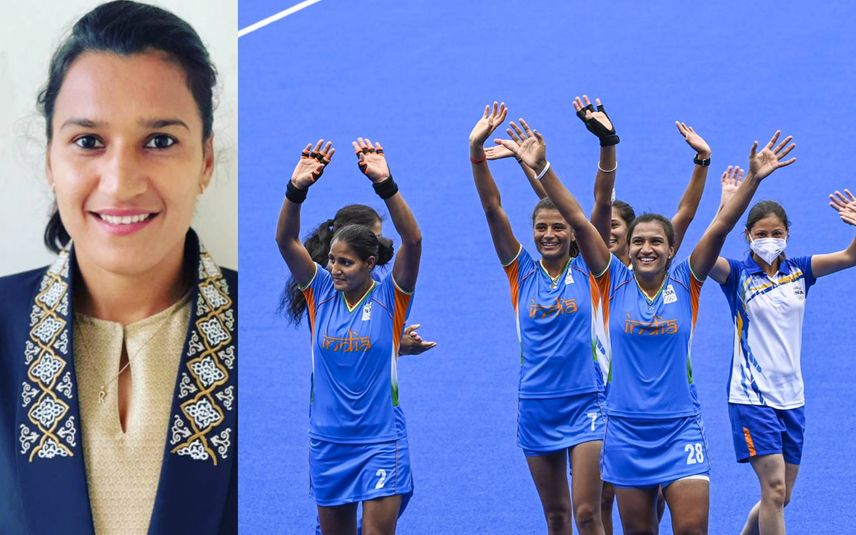 Rani Rampal with her teammates after winning the match against Australia | Photo: Instagram|PTI

India’s women hockey team wrote history after they drifted into the semis by thwarting Australia in the quarter-finals. It was a major upset nobody predicted. The victory not only placed India in the spotlight of the sporting world but also in the hearts of many young minds in the country. What makes their success extra special is that they are coming from a particular stratum of society. They represent a side of India that is impoverished, struggling to voice their presence. Only those who achieve the extra mile could actually reach the heights they have reached.

Every member of the Indian squad has such a story to tell. Players like Sushila Chanu, Grace Ekka, Udita, Neha Goyal, Nisha Warsi, and Lalremsiami had to face major financial hardships before they found success in hockey. Confronting the evils of patriarchy, social customs, and limited opportunities, these women fought all odds in their life to this point. However, one player stands right in the middle of this conversation, and it is the captain of the team, Rani Rampal.

At the helm of India’s triumph is Rani Rampal, the Indian forward and the backbone of the team. The Twenty-six-year-old is a towering figure, scoring and driving her side to a success she always dreamed of. As an excellent goal poacher and a leader, her winning goal against the US in the qualifiers earned the country a place in the Tokyo Olympics.

Despite the success, she had learned some lessons from her childhood, of poverty, and what it means to be truly successful.

Rani was born in Shahabad Markanda, in Haryana, into a family that fought all kinds of odds, and struggled to keep their lives afloat. A young Rani had to witness these frailties of life before she even picked up a hockey stick. Her father, a cart-puller, and her mother, a maid, hardly earned anything and had to satisfy with just two meals a day. She later recalled how her house flooded during the monsoon season, with no electricity and mosquitoes all around.

With her father earning Rs 80 a day, Rani couldn’t afford to buy a hockey stick so that she could train. However, the seven-year-old somehow managed to convince his father and joined the Shahabad Hockey Academy run by reputed coach Baldev Singh. With a broken hockey stick, wearing just salwar kameez, she never missed a day of training. Upon seeing her progress and determination, the coach bought her hockey kits and oversaw her dietary needs. Within a few years, she was moulded into one of the most promising forwards India had discovered in a very long time.

At the age of 15, she became the youngest player to be selected for the national side that participated in the 2010 World Cup. It was a dream come true for her and the family. As she started to play professionally, GoSports Foundation, a non-governmental sports organisation came forward to support her financially, as her family had no other means to support her otherwise. After a series of successes, she became an integral part of the team. Meanwhile, she became a part of the team which qualified for the 2016 Rio Olympics after 36 years.

In 2020, she was awarded the prestigious 'World Games Athlete of the Year' and became the first-ever hockey player in history to do so. She received the Arjuna award in 2016.

Her story is an ultimate reminder of the hardship an athlete goes through to be where they are.