Indian table tennis player Sathiyan Gnanasekaran was like 'Superman' on Day 9 of competitions at the Commonwealth Games here, figuring in six matches and losing just one. 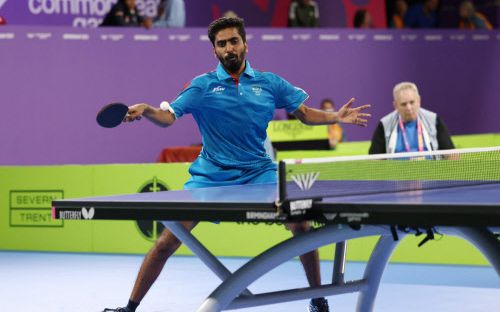 Birmingham: Indian table tennis player Sathiyan Gnanasekaran was like 'Superman' on Day 9 of competitions at the Commonwealth Games here, figuring in six matches and losing just one.

Sathiyan's senior teammate Achanta Sharath Kamal too figured in six matches on Friday and managed to advance to the next stage in men's singles and doubles.

Sathiyan played six matches in the mixed doubles, men's doubles, and men's singles competitions on Friday, with his first game starting at 09:30 hrs and the last at 19:45, playing two matches each in the three sections. He reached the quarterfinals in men's singles and semis in the men's doubles but lost in the mixed doubles in which he and his partner Manika Batra were the favourites as they are ranked in the top-10 in the world.

Sathiyan, however, was happy with the way the day panned out.

"Wow. A super long day. I came in at 07:30 and I've been in the stadium since morning. I couldn't go out to the hotel. It was a test of my physical strength and mental strength as well.

"Unfortunately we lost in mixed (double) but in the whole perspective, it's been a very good day in that I reached the men's singles quarterfinals and men's doubles semifinals," Sathiyan said.

He defeated Paul McCreery of Northern Ireland 4-0 and then went on to overcome Nicholas Lum of Australia 4-2. He partnered with Achanta Sharath Kamal for two wins in men's doubles. He and Manika Batra won one match in mixed doubles but went on to lose a close match to Javen Choong and Karen Lyne of Malaysia in the quarterfinals.
IANS