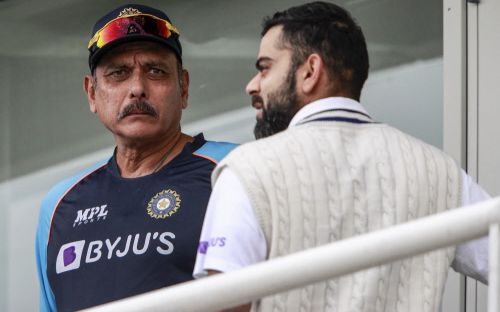 London: India head cricket coach Ravi Shastri is isolating along with three other members of the tourists' backroom team after testing positive for Covid-19.

Shastri returned a positive lateral flow test on Saturday evening - day three of the ongoing test at the Oval - and has not travelled to the ground for day four.

He is now awaiting the results of a PCR test, alongside bowling coach Bharat Arun, fielding coach Ramakrishnan Sridhar and physiotherapist Nitin Patel.

The remainder of the squad were cleared to report for duty after two separate lateral flow tests, one on Saturday night and one on Sunday morning.

A statement from the Board of Control for Cricket in India said all four "shall remain in the team hotel and not travel” until the results of the PCR test are known.

India resumed play on the fourth day on 270-3 and with a lead of 171 runs after bad light forced an early end to play on Saturday. England had earlier eked out a 99-run lead after the first innings.

The series is locked at 1-1 with one more test to come, at Old Trafford starting next week.