Rajmohan is beside Kerala athletes Noah Nirmal, Alex Anthony to support them at Tokyo 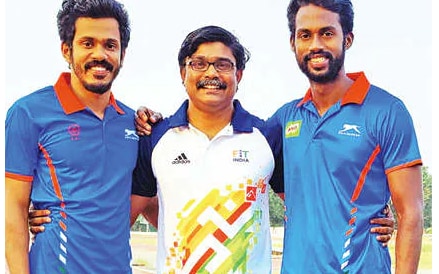 Ambalapuzha: Noah Nirmal Tom from Kozhikode and Alex Anthony from Thiruvananthapuram are confident that their coach MK Rajmohan from Vandanam, Ambalapuzha will be there to support and cheer them in Tokyo.

Retired as Junior Warrant Officer from the Indian Air Force, he is an athletic coach at the Kerala State Sports Council. Rajmohan, who competed in the long jump at the school level and won many prizes, continued his achievements during college days too. He studied at Ambalappuzha Govt Model Higher Secondary School, Alappuzha Carmel Academy, SDV Boys Higher Secondary School, and S.D College. He joined Air Force in 1998.

He was member of the Air Force 400m team for seven years. He later became a coach in the Air Force's sports division. In 2015, he became part of the national team. After retiring from the Air Force in 2018, he joined Operation Olympia Scheme in Thiruvananthapuram as part of the Kerala Sports Council.

Noah and Alex will be competing in Tokyo in their favorite event 400m. Rajmohan broke the record twice in the 400 meters during his time in the Air Force. While Noah Nirmal Tom is competing in the 4x400m relay team, Alex Anthony will hit the track in the mixed relay.

Rajmohan broke a record in 2002, set by Thrissur native O L Thomas in 1969. The following year he broke his own record again.