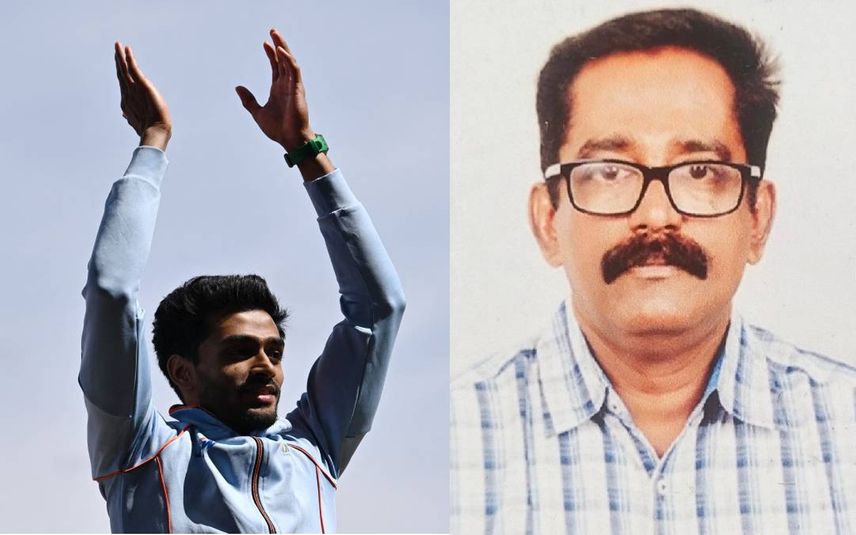 Kozhikode: Malayali athlete Eldhose Paul produced a personal best of 17.03 metres in the Men's Triple Jump to bag India's first-ever gold medal in this discipline of track and field in the Commonwealth Games. With this achievement, Paul also became the first Keralite to win individual gold at the Commonwealth Games.

His rise to the top has a long history of struggles and sacrifices. The school teacher who identified Eldhose’s potential in the early days, talked to mathrubhumi.com and narrated the athlete’s humble beginnings.

Eldhose, hailing from Kolenchery, lost his mother when he was only barely four. It was his grandmother Mariyamma, an octogenarian, who played a pivotal role in shaping the future of this young lad.

Even before Eldhose made his mark while studying at Mar Athanasius College, the talent of Kolenchery native was first identified and nurtured by Benny Manakkadan, the long-serving physical education teacher of the Krishnan Elayath Memorial High School (KEM) in Alangad.

Benny identified the potential in Eldhose when Mariyamma brought him to his house one day requesting to enrol him in KEM high school. "His grandmother requested me to enrol him in the school and let him stay at the hostel. He was from my neighbourhood in Kolenchery. He was enrolled into the 5th standard and was permitted to stay in the school hostel. He often travelled with me to school after the holidays. In time, we became close and I started to notice his calibre in sports," Benny told mathrubhumi.com.

Eldhose studied in the school from standard 5 to 9, and it was here that he perfected his skills to be a seasoned athlete. "He was very hardworking and got involved in a number of events. At that time, we had students training in high jump, long jump, pole vault and several others. He was enthusiastic about taking part in all events and loved competing with his colleagues. During his time, he pursued pole vault at the junior level and even grabbed a medal. However, he was in his prime when he left the school after 9th standard," he said.

Benny, who coached several well-known athletes, recalls how he let Eldhose leave the school after the hostel run by Benny wound up due to financial problems. However, Benny saw his talent and helped him enrol into a new school and find a coach.