You are all winners and role models, PM Modi tells Tokyo-bound para-athletes 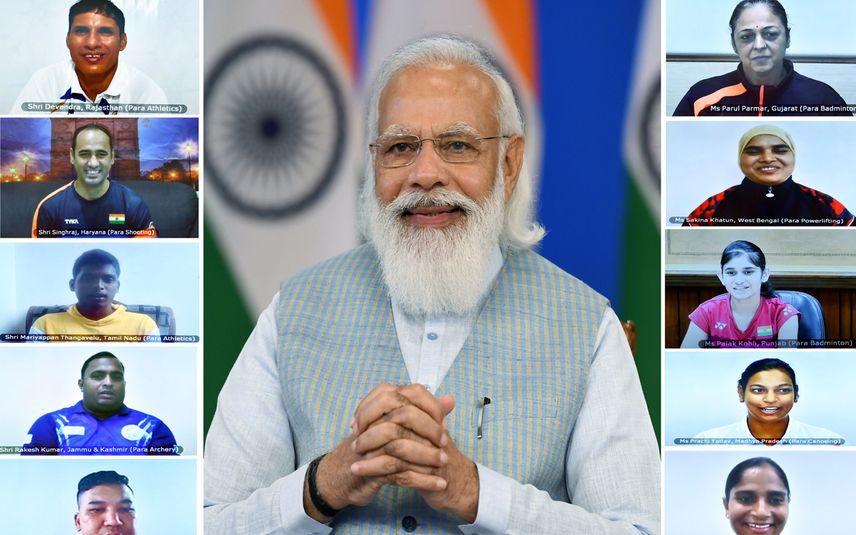 New Delhi: "You are all winners and role models," Prime Minister Narendra Modi told India's top para-athletes, who are set to compete in the upcoming Tokyo Paralympics.

Modi virtually interacted with 10 athletes, including 2016 Rio edition gold winners Devendra Jhajharia and Mariyappan Thangavelu, and urged them to compete without pressure.

He also spoke with the family members and coaches of the para-athletes.

The Paralympics will be held between August 24 to September 5.

"In spite of all the difficulties in your lives, you did not lose heart and kept on fighting. By your hard work and strong will, you have reached this stage against all odds. You are going the represent the country in the biggest sporting stage," Modi said.

"You all are winners and role models. You should not play with pressure. I hope you all will give your best and medals will follow. You will make the country proud."

India is sending a 54-member team -- the largest ever -- in the upcoming Tokyo Paralympics with hopes that the country will produce its best ever performance.

The team has some of the brightest medal prospects like Jhajharia, seeking his third Paralympics gold (after 2004 and 2016) in F-46 javelin throw, Mariyappan (T-63 high jump) and world champion Sandeep Choudhary (F-64 javelin throw).

India will compete in nine sports.

Mariyappan, who had won a gold in the last edition in Rio, will be the flag bearer of the Indian contingent during the opening ceremony.

The Prime Minister said he is hopeful that the para-athletes will create history at the Games.

Talking about the overall development of a sporting culture in the country, Modi said the number of Khelo India Centers will be increased to 1000 from current 360 to tap local talent and groom them, especially in the rural areas.

"Our villages and remote areas are full of talent and the contingent of para athletes is a living example of that. Today the country is trying to reach the players, special attention is being paid to the rural areas."

"Equipments, grounds and other resources and infrastructure are being made available to the sportspersons. The country is helping its sportspersons with an open heart.

"We have to keep on improving our ways and system to develop sports culture in India, shed fears of earlier generations."

Modi said earlier giving facilities to 'Divyang Jan' was treated as part of welfare activities, but it is now considered as part of responsibility of the country.

"Laws like ‘The Rights for Persons with Disabilities Act' and initiatives like ‘Sugamya Bharat Campaign' are changing lives and giving confidence to numerous talents all over the country," Modi said.

"We have won 12 medals so far in the Paralympics. Our athletes have done very well in the international events in the last few years.

"I hope they will give their best and win laurels for the country."

India will start its campaign on August 27, with men's and women's archery events.