When more than 5000 athletes from 72 nations and territories gather at one place for some high-adrenalin sports competitions, controversies can't be far away. The Birmingham 2022 saw many controversies, some of them involving the Indian teams which became talking points on mainstream and social media. 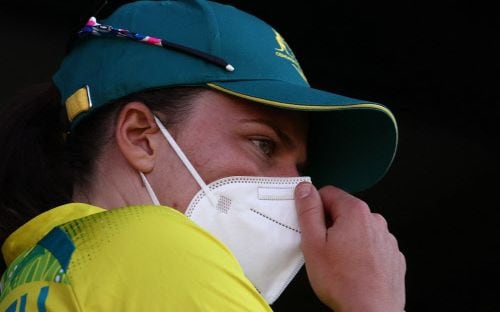 Birmingham: When more than 5000 athletes from 72 nations and territories gather at one place for some high-adrenalin sports competitions, controversies can't be far away. The Birmingham 2022 saw many controversies, some of them involving the Indian teams which became talking points on mainstream and social media.
IANS takes a look at some of them:

A player allowed to play in a match despite testing positive for Covid-19 has been unheard of in the top echelons of sports since the pandemic started. The Organising Committee of Birmingham 2022, the International Cricket Council (which is actually conducting the tournament as an international federation), and the cricket boards of Australia and India allowed this dangerous situation in Birmingham.

Australia all-rounder Tahlia/Mcgrath was allowed to play the women's T20 Cricket final against India at the Edgbaston ground on Sunday, despite testing positive for Covid-19, putting in danger the health of Indian and Australian players.

The officials claim that McGrath reported mild symptoms and had a low virus load and that they had "implemented a range of comprehensive protocols" during and after the match to minimize the risk of transmission, but the fact remains that there was a health risk for players. At one time Tahlia was even seen waving her teammates away as they tried to rush toward her to celebrate the fall of a wicket.

The entire incident brings to the forefront the relaxed Covid-19 rules implemented by the Birmingham 2022 Organising Committee and the ridiculous manner in which some of the rules were implemented.

While Tahlia McGrath was allowed to play the final, Indian women's hockey player Navjot Kaur was sent back home despite having no symptoms.

Only the players and support staff were tested on arrival, journalists and other officials were not. There were no restrictions on the spectators' entry into the stadium and nor were there any about them being vaccinated.

This presented a ridiculous situation in which a journalist has to wear a mask when talking to an athlete in the mixed zone but not when recording a video with any athlete in the I-zone (a special area when non-rights broadcasters and digital media were allowed to film the players).

The organisers did not even tighten their Covid-19 protocols even after more than a dozen positive cases were recorded in pre-Games tests.

AUSTRALIA GETS TO RETAKE SHOOT-OUT ATTEMPT AFTER TIMER GAFFE

The Australian women's hockey team was asked to retake a penalty shoot-out in the semifinal against India despite being saved earlier because the officials claimed that the timer was not working.

India goalkeeper and skipper Savita was left stunned as the officials informed her that the attempt will be retaken as the timer had not been on when the first shot was taken. The Australians scored off the retaken shoot-out attempt and went on to win the match 3-0 as the shell-shocked Indians failed on all three attempts.

The FIH was forced to issue an apology claiming that the officials hurried and went ahead with the first shoot-out even before the timer was started.

BOXER LOVLINA BORGOHAIN KICKS UP A STORM OVER COACH'S ACCREDITATION

With the limited number of support staff being allowed in the village, Lovlina Borgohain's coach Sandhya Gurung was given a different accreditation and not allowed inside the village. The boxer raised the issue on social media alleging "mental harassment", eventually, her coach's accreditation was changed after boxing team's chief coach Bhaskar Bhatt agreed to move out of his room.

Unlike previous Games, the Birmingham 2022 organisers did not have one single athletes village to accommodate all sportspersons. So, the athletes were hosted at a total of five small villages mostly along with those for their sport or 2-3 other sports.

Though it was convenient in some cases where the athletes didn't have to travel long distances from a centralized village to the venues, the atmosphere of a huge village with athletes, the camaraderie, the interactions, and the huge celebrations after winning medals were missing. This did not go down well with some sportspersons.
IANS