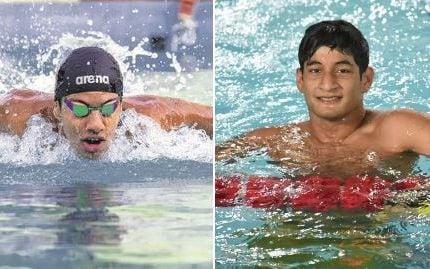 Birmingham: Indian swimmers Advait Page and Kushagra Rawat qualified for the final of the men's 1500m freestyle after finishing fourth in their respective heats at the Commonwealth Games here on Tuesday.

The top eight swimmers from the two heats made it to the final.

Earlier in the day, Srihari Nataraj bettered the best Indian time en route a third place finish in heat 2 but could not qualify for the final of the men's 200m backstroke event.

Nataraj clocked 2:00.84s to be the first reserve in the event.

His previous best was 2:01.70s, which had come during the FINA World junior swimming championships in 2019.

In swimming, a timing is considered a national record only when it has been achieved at the National Aquatics Championships.

Hence, the timings clocked in other meets are called the best Indian time.

The best eight swimmers from the three heats qualified for the final.

The Indian finished ninth overall and has been kept as the first reserve, which means if anybody pulls out before the final, he would sneak in.

Nataraj missed out on a direct final berth by just 0.19 seconds.

Nataraj had earlier finished fifth, his best-ever result in the CWG, in the men's 50m backstroke final with a timing of 25.23 seconds. PTI