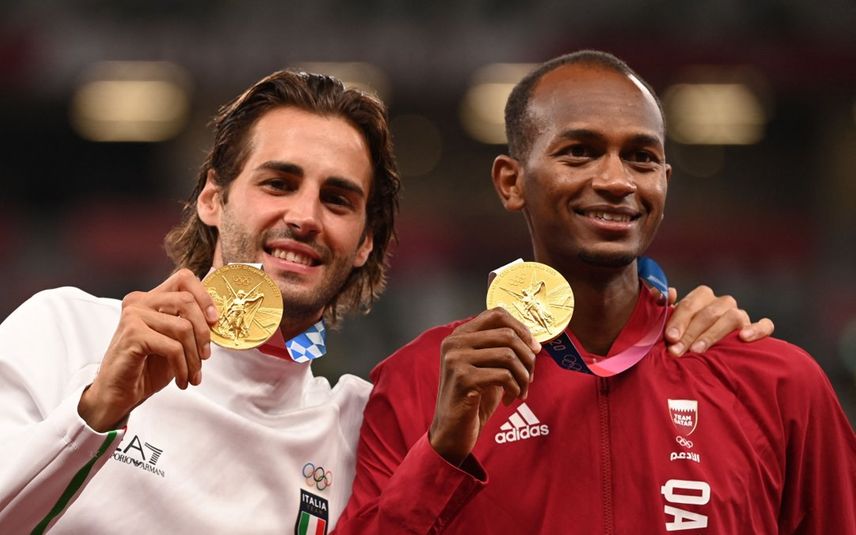 Social media is buzzing with the kindness and friendship shared between the two athletes Italy's Gian Marco Tamberi and Qatar's Mutaz Essa Bershim.

Barshim and Tamberi competed in the high jump event in Tokyo. After both cleared 2.37 meters without having any failed jumps, each was unable to clear the 2.39-meter mark in all three attempts. The official then offered them a “jump-off rule” to decide the gold medal winner. However, the media speculated that Mutaz Essa Barshim convinced organizers to share his gold medal with his friend Gianmarco Tamberi. But in reality that is not the case.

In the high jump and pole vault, there is an Olympic rule that allows sharing of gold medals. The medals are awarded to the athlete who clears the maximum height. If the remaining two athletes fail to clear the height, then the gold medal will be given to the person who clears the previous height with the least attempts.

Here both athletes cleared the previous height in the same number of attempts, and jump-off is used to decide the winner. But, the medal can be shared, if both athletes decide to do so and that is what happened in the High Jump final in Tokyo.

The rule states that:

"The jumpers have to face a jump-off if there will be a tie for first place.

The height will be greater than the previous level. Each player will be given one chance for each clearance".

It was the first time since the 1912 Stockholm Olympics that a gold medal was shared. Tamberi, who missed the 2016 Rio Olympics due to a leg injury, overcame his emotions, and Barsim also wept while celebrating with the team. If we keep apart the rule and think from a sporting perspective, there is a question on why they choose to quit trying again. However, as per the rules, they can both be happy with the decision they made. After all, both won gold medals.