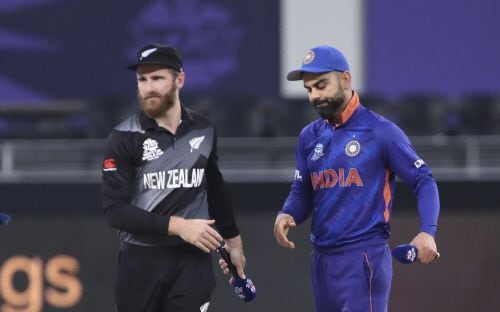 Dubai: New Zealand skipper Kane Williamson won the toss and elected to bowl against India with both teams looking for their first win in the Twenty20 World Cup on Sunday.

The Kiwis made one change from their opening loss to Pakistan with fast bowler Adam Milne coming in for Tim Seifert. Devon Conway will take over wicketkeeping duties.

"We are going to bowl, dew factor at this time of the year," Williamson said at the toss. "Look forward to another challenge."

India are coming off a week's rest, and received stinging social media abuse after their 10-wicket defeat to rivals Pakistan on October 24.

They have made two changes to their team with batsman Ishan Kishan and all-rounder Shardul Thakur coming in for the injured Suryakumar Yadav, who has back spasms, and Bhuvneshwar Kumar.

"We would have bowled first as well. We need a solid start and to have wickets in hand," skipper Virat Kohli said.

"It's ridiculous, we are playing twice in 10 days. The guys have recovered well. It's another opportunity to come out and correct the mistakes."