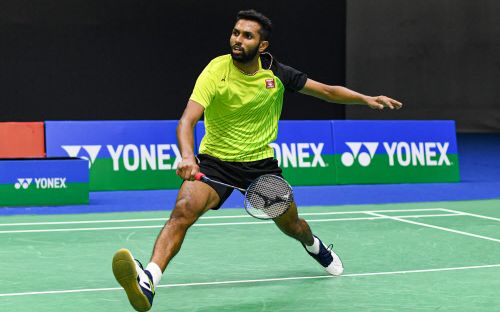 Surat (Gujarat): HS Prannoy-led Kerala got the better of hosts Gujarat 3-1, in the summit clash in the Badminton Mixed Team Championship of the 36th National Games here at the PDDU Stadium on Sunday.

They will face out Telangana in the final.

The Telangana-Maharashtra match, expectedly, was a fascinating clash.

Men's doubles specialist Chirag Shetty teamed up with Ritika Thaker to beat Vishnuvardhan Goud and Gayatri Gopichand 21-13, 16-21, 21-15 in 49 minutes to put Maharashtra in the lead.

It looked like Samiya Imad Farooqui would put the top seeds ahead when she had three match points in the second game against Malvika Bansod. But the left-handed Maharashtra shuttler not only saved those but also went on to win the third and final game.

This meant that the onus to save the tie for Telangana fell on the experienced combination of B Sumeeth Reddy and Vishnuvardhan Goud. But it looked all lost when Chirag and Viplav Kuvale took the opening game, taking an 11-7 advantage in the second.

Sumeeth and Visnuvardhan, however, turned the tables on them to force the decider. In the third and final game, the Maharashtra combination managed to save three match points but not the match. The Telangana duo won 18-21, 21-19, 23-21.

The women's doubles combination of N Sikki Reddy and Gayatri Gopichand then breezed past Ritika and Simran Singhi 21-9, 21-16 to hand their team a spot in the final.

"We were aware that the match hinged on the doubles performance. We thought Samiya had a good opportunity against Malvika but somehow she made a few errors to lose the match,'' said Telangana coach Rajender Kumar.

Prannoy was impressive in his 21-15, 21-14 win over Aryamann Tandon after Kerala's mixed doubles duo of MR Arjun and Treesa Jolly had beaten

Gujarat's top player Tasnim Mir, who is carrying a niggle, was not fielded in either mixed doubles or the singles. However, Adita Rao registered a consolation 21-12, 21-18 win over Andrea Kurien.

Arjun then combined with Shankarprasad Udayakumar to defeat Purushottam Awate and Bhavi Jadhav 21-12, 21-15 in 25 minutes to wrap up the semifinal.