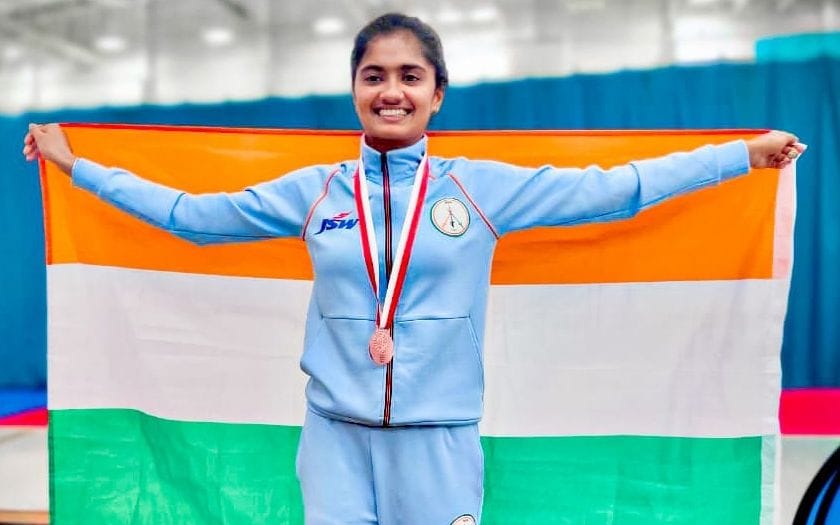 Gujarat's star Elavanil Valarivan began the final rather slowly and moved to the top spot after the second series. The leader board kept changing till the last shot in the fifth series and Elavenil managed to pip Mehuli Ghosh by 0.3 points to set up a gold medal match with top-ranked Tilottama Sen.

In the final, Elavenil Valarivan took an early 4-0 lead. Tilottama tried to keep pace by winning a couple of points at regular intervals but lost nevertheless.

In athletics at IIT, Gandhinagar, nine National Games records fell during the day.

Parvej Khan then broke the renowned Bahadur Prasad's 28-year-old National Games record in the men's 1500m to the delight of the fraternity. He slashed nearly two seconds off his personal best time to win the metric mile gold in 3:40.89.

Amlan Borgohain, who has been in good form this season, stopped the clock at 10.28 seconds, two-hundredths of a second outside the National Record held by Amiya Kumar Mallick since 2016.

Elsewhere, powered by Ankita Raina, Gujarat women booked their final berth with an easy win over Karnataka. They will start favourites in the gold medal match against Maharashtra at the Riverside Sports Complex on Saturday.

Meanwhile, Divya Kakran (Uttar Pradesh) stopped a Haryana sweep of all six gold medals at stake on the opening day of wrestling. She won the women's 76kg class title, beating Haryana's Reetika in the quarter-finals and Rohini Satya Shivani (Telangana) and Rani (Himachal Pradesh) with a measure of comfort in the subsequent bouts.

Haryana men and Odisha women claimed the Rugby 7s gold medals respectively with victories over the Maharashtra teams. Haryana men played a better second half to sprint away from 7-7 at the break to a 19-7 win. Odisha women, who stunned national champions Bihar in the semi-finals, dominated their title clash, opening up a 15-0 lead in the first half in a 22-0 win.

Haryana scored a golden double in netball, their men's team defeated Telangana 75-73 in a thriller that went to the wire and their women quelled Punjab's challenge 53-49.