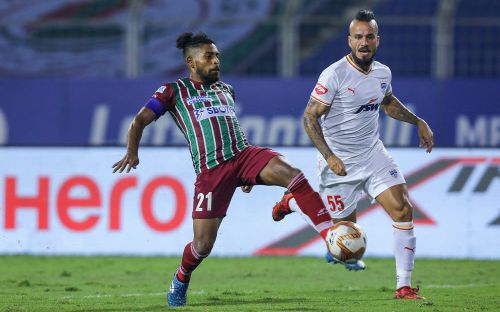 ATK Mohun Bagan were the finalists in the 2020/21 ISL, while Bengaluru FC finished seventh on the points table. The two times these teams have played last season, ATKMB came out on top with 1-0 and 2-0 wins. While that may suggest that ATKMB have a slight edge going into the game, the truth is this is their maiden foray into the continental club competition compared to Bengaluru FC who reached the final in 2016.

Not just that, following their win over Maldives' Club Eagles in their play-off match on Sunday thanks to Jayesh Rane's first-half strike, Bengaluru FC made it to the AFC Cup group stage for the sixth time. So, definitely the experience is on their side.

Both the teams have undergone a lot of change in terms of personnel since their last meeting in the ISL. ATKMB have brought on board six new players, while Bengaluru FC have acquired as many as nine new players as well as a new head coach in Marco Pezzaiuoli.

On paper, ATK Mohun Bagan appear to have a stronger squad as they boast of players like Roy Krishna, David Williams, new signing Hugo Boumous and Carl McHugh -- all seasoned performers in the ISL.

But ATKMB haven't played any competitive games since the ISL final against Mumbai City FC in March. Pezzaiuoli's men, on the other hand, have played twice, against Nepal's Tribhuvan Army's FC in April and a couple of days ago against Maldives' Club Eagles. However, it must be said that Pezzaiuoli's men weren't entirely convincing in their win against the Eagles, particularly in defence where new-singings Yrondu Musavu-King and Alan Costa need to tighten up a bit.

"Bengaluru has signed a number of new foreign footballers. The coaching staff has also changed. As a result, there has been a difference regarding the strength. The match will be very tough. The biggest thing is that we know each other and have played a lot of matches. If we want to win, we have to fight till the last minute," ATKMB head coach Antonio Lopez Habas, who has two ISL trophies to his name, said ahead of the contest.

"The results of the past matches will remain history. In reality, every match is a new challenge. It is a new environment, a new field. We have to adapt quickly. The fate of the match will depend a lot on all this. Most of all, it's an international tournament. Everyone will desperately try to establish themselves," he added.

Pezzaiuoli, though, made it clear that they were not considering themselves favourites against the Kolkata-based team. "We have new players, a new coach (referring to himself), a team and a new spirit. We have prepared well, but I think ATK Mohun Bagan is the favourite here. They invest a lot of money to win the trophy; they were in the final last year," he said.