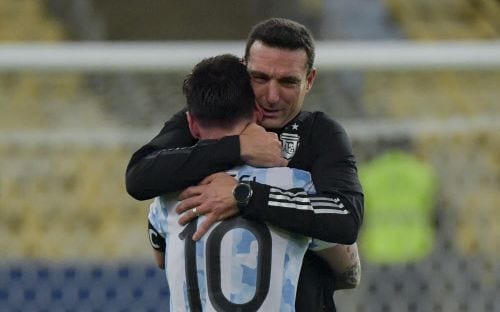 Sao Paulo: Argentina manager Lionel Scaloni has said that that he is likely to make several changes to his starting lineup for the FIFA World Cup qualifier against Brazil, but played down fears about the fitness of captain Lionel Messi.

"The idea is to make some changes because of the short interval between matches," Scaloni told a virtual news conference on Saturday. "We will make a decision depending on how the players are after training."

Scaloni said he was confident Messi would start despite fears for the 34-year-old's well-being after he was scythed down by Adrian Martinez in the first half of Thursday's match at Estadio Olimpico, Xinhua reports.

The defender received a straight red card for the studs-up challenge, which struck Messi just below the left knee and left him unable to stand up for almost five minutes.

Sunday evening qualifier will be the first meeting between the arch rivals since the Copa America final in July, which Argentina won 1-0 at Rio de Janeiro's Maracana stadium.

Brazil currently lead the 10-team South American qualifying group with seven wins from as many matches, six points ahead of second-placed Argentina.

The top four teams will earn a berth at football's showpiece tournament in Qatar next year while the fifth ranked side will advance to an intercontinental playoff.
IANS

'No I'm not going to retire': Messi after Argentina lands FIFA World Cup