The empty stands of Jawaharlal Nehru stadium in Kochi and the pain that has caused the fans have been picturised in the album. 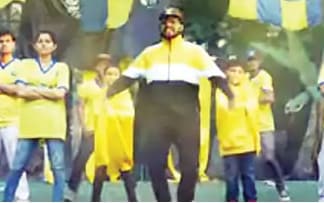 Malappuram: Kerala Blasters fan club ‘Manjappada’ has released a music album even when the team remains winless in this season so far.

Tens of thousands of people have already viewed the song ‘Padayani’ within hours of its release. The fans are disappointed with the team’s performance this season. Yet, the song conveys the loyalty of Manjappada to their beloved team.

The shooting of the album was completed in Kochi and Thiruvananthapuram. It is directed by AR Sreekesh aka Pele. Akhil V Menon, Christi Sebastian, Thakazhi, Shuka 4beats worked in the background.

The album was released on Saturday. The makers also wanted to motivate Kerala Blasters players ahead of their match against East Bengal FC.

The empty stands of Jawaharlal Nehru stadium in Kochi and the pain that has caused the fans have been picturised in the album.

Kerala Blasters’ 12th man is one of the team’s biggest strengths. ‘Padayani’ pledges Manjappada’s love and support for the team.