Made conscious effort to strike at a higher pace; but plan changed due to losing wickets: Kohli

On August 28, Virat Kohli, making an international comeback after a break of month and a half, was scratchy in top-scoring with 35 against Pakistan. In his 100th T20I game, Kohli had streaks of luck - a thick edge was dropped in the slips on the second ball he faced. There were tons of inside and outside edges falling short of fielders or shielding the stumps. 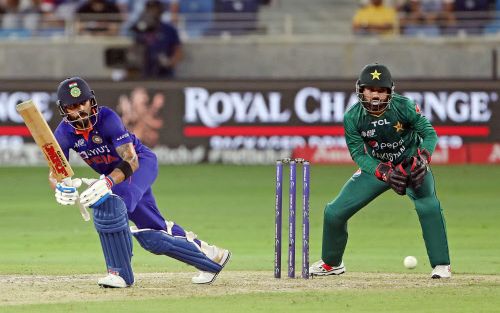 Dubai: On August 28, Virat Kohli, making an international comeback after a break of month and a half, was scratchy in top-scoring with 35 against Pakistan. In his 100th T20I game, Kohli had streaks of luck - a thick edge was dropped in the slips on the second ball he faced. There were tons of inside and outside edges falling short of fielders or shielding the stumps.

But, again on a Sunday, in the Super Four match against Pakistan, the fluency and timing which eluded Kohli a week ago was there. He top-scored with 60 off 44 balls, hitting four fours and a six, while running hard between the wickets and was superb against pacers apart from punishing anything short.

But it was the six which got him his fifty in 36 balls, which was hit with some style. Shuffling towards off-side, Kohli whipped elegantly off his wrists off Mohammad Hasnain to send the fuller delivery over deep mid-wicket, giving scores of fans delight and excitement over seeing the talismanic batter in full flow.

Unfortunately, Kohli didn't get much support as others around him fell in a bid to go big, forcing Kohli to delay pressing the accelerator pedal and go deep for India to post a competitive 181/7, which wasn't enough to deny Pakistan a thrilling five-wicket win.

"Today (In Sunday's match), I was making a conscious effort to strike at a higher pace. When we lost wickets, there was communication and our plans changed, where I had to bat till the 18th with Hooda. If there were a couple of batters, I would've gone with the same tempo and tried to hit more boundaries or sixes. But again, I ended up being in a situation where I had to go deep," said Kohli in the post-match press conference.

Kohli was appreciative of how Pakistan pulled back in the back end of the innings and stated that he would continue to bat in the same way, like he did in Sunday's game while batting first in future. "I thought Haris Rauf bowled a great last over. He nailed those slower balls and yorkers, with that pace when you execute, it's always difficult to get it away. I'm going to continue - especially batting first - to bat the (same) way, trying to take the game on and stay ahead of the asking rate, understanding the conditions and just bat freely."

"As long as I am in a good space and confident of my batting, I know I can bat in many ways. It's just about getting back into the groove and getting confident with how you're playing and once that happens then the situation dictates how you need to play."

In Sunday's match, India reverted back to their aggressive, ultra-attacking approach with the bat. Though it got them 181/7, they were also hampered by the loss of Suryakumar Yadav, Rishabh Pant and Hardik Pandya in the middle overs.

Kohli pointed out that the loss of wickets in the middle overs in itching to get 20-25 extra runs wasn't a cause of worry, as when the approach does work, it will make a difference in India's totals.

"If you've seen the way we've been playing, it's given us the results we need, and in our middle overs, the run rate has also improved. It's something I, as a batsman, really took keen notice of, and I knew that is one area we need to keep improving on. We've spoken about this that sometimes it won't come off, the way you want and today, we lost a few wickets in the middle phase which didn't allow us to go towards the 200 target."

"Because after (Deepak) Hooda and me, it was Bhuvi (Bhuvneshwar Kumar), so the bowlers were to follow. That makes a bit of a difference, but we do possess the skills to analyse the situation and play accordingly as well. But given the situation, if we had a couple of wickets in hand, we could've got more runs."

"We're not disturbed by losing wickets through the middle overs, because that's the way we want to play. We want to be able to get those 20-25 extra runs that can eventually make the difference in big games." IANS