Kerala's PR Sreejesh among 12 to be awarded Khel Ratna 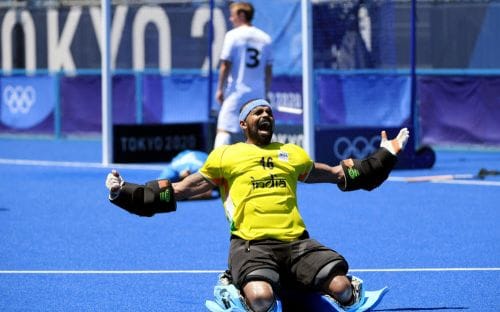 Sreejesh after the game I Photo: ANI

New Delhi: Olympian PR Sreejesh on Tuesday became the third Keralite to be decorated with the Khel Ratna Award, the highest sporting honour of India. Sreejesh, along with 12 other sports stars are awarded Khel Ratna for their overall contributions to the growth and promotion of sports in the country.

Sreejesh has received the Arjuna award in 2015 and the prestigious Padma Shri in 2017. Sreejesh played a pivotal role in the Indian hockey team's bronze medal win at the 2020 Summer Olympics men's field hockey. KM Beena Mol and Anju Boby George were the only Keralites who had previously won this award.

Ministry of Youth Affairs and Sports announced the National Sports Awards 2021 on Tuesday. The awardees will receive their awards from the President of India at a specially organized function at the Darbar Hall of Rashtrapati Bhavan on November 13.

All men's Hockey India team who has won the historic bronze medal in Tokyo 2020 Olympics has been awarded Arjun Award with the exceptions of PR Sreejesh and Manpreet Singh.

Born and raised in Kizhakkambalam in Ernakulam district, Sreejesh was passionate about athletics before his coach suggested that he turn his eyes to goalkeeping in hockey. He made his debut for the national junior team in 2004 and made his debut in the senior national team in 2006, at the South Asian Games held in Colombo. Flowing with confidence, the stop stopper grabbed the 'Best Goalkeeper of the Tournament' at the 2008 Junior Asia Cup. His second 'Best Goalkeeper of the Tournament' award came at the 2013 Asia Cup, and later he played a key role at the 2012 Summer Olympics in London, and then World Cup in 2014. At the 2014 Asian Games, he played a crucial role in Indian team winning a gold medal and in 2016 he was awarded the captain arm band. At the 2016 Rio Olympics, Sreejesh led the Indian team to the quarterfinals of the tournament.

(With added inputs from ANI)