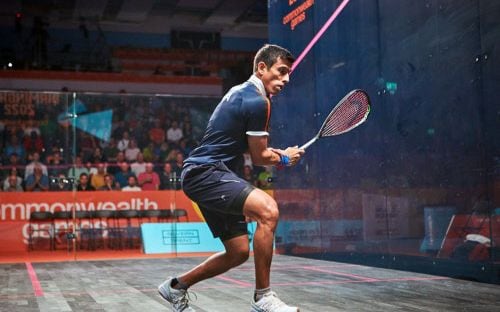 World No.15 Ghosal dominated the contest against England's James Willstrop from beginning to end, winning 11-6 11-1 11-4 in the bronze play-off.

It was Ghosal's second CWG medal, having won a mixed doubles silver with Dipika Pallikal in the 2018 Gold Coast edition.

Ghosal, playing his fourth CWG, broke into tears after the play-off against the former world number one. The medal meant the world to him and it came in probably his last appearance at CWG.

The 35-year-old Ghosal proved too strong for his 38-year-old opponent who is also at the fag end of his illustrious career. The Indian outclassed the Englishman in all aspects of the game, from court coverage to placement of his shots.

"The first game lasted 18 minutes and was really intense. Ghosal being the younger of the two was much stronger.

"I thought yesterday he played even better in the semifinals. Years of hard work has led to this. It is a great day for Indian squash," said former national coach and current team manager Cyrus Poncha, who watched Ghosal make history.

Earlier in the day, the mixed doubles pair of veteran Joshna Chinappa and Harinder Pal Singh Sandhu progressed to the pre-quarterfinals.

The Indians were a bit shaky initially and ended up conceding the first game.

However, they quickly turned things around and made a strong comeback to bag the next two games without breaking much sweat.

Sunayna downed her Guyanese opponent 11-7 13-11 11-2 in what turned out to be a comfortable victory for the 23-year-old squash player.