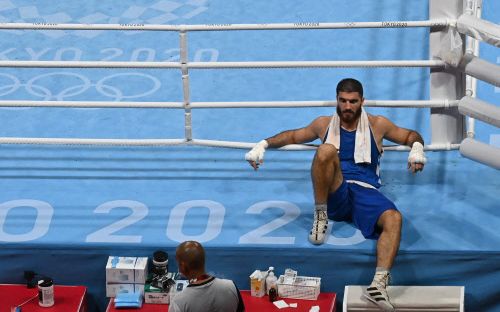 Tokyo: A French super-heavyweight boxer lashed out at an "injustice" and sat in protest on the side of the ring after he was disqualified for headbutting in the Tokyo Olympics quarter-finals Sunday.

In what was the first major controversy in the boxing in the Japanese capital, Mourad Aliev was disqualified in the second round against Britain's Frazer Clarke.

The 26-year-old Aliev sat beside the ring ropes afterwards, seething, and claimed that officials had admitted they had made a mistake.

"I sat down to protest against the unfairness for me," he said.

"I prepared for these Games for four years... I really wanted to fight against the injustice, so that was my way to show that I don't agree with that decision."

He added: "So the judges went to discuss together to know what happened. They said that I would have won, however it was already written that I was disqualified so the decision cannot be unmade.

"It was already too late."

Aliev said that the referee had failed to give him any warning before the bout was called off.

"I was just stopped without any warning and they just told me that 'you lost' -- just like that," he said.

"So I think it was an act of sabotage."

Clarke, who had cuts to both eyes, called the situation "confusing".

"The referee made his decision, that's what he's there to do. There's a bunch of great referees and officials here so you know we have to believe in what they do.

"I think they've done whatever they deemed to be correct."

Clarke said that he told Aliev "to calm down".

Controversial scoring is often a feature of Olympic boxing, but the Rio 2016 competition was marred by especially poor judging and an IOC taskforce took over running the sport at the Tokyo Games to prevent a repeat.