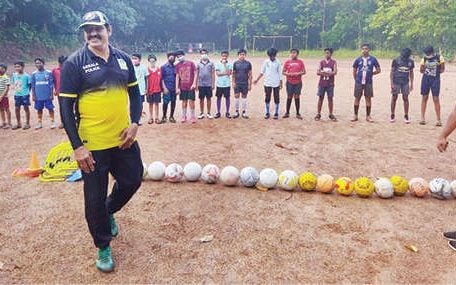 Othara: KT Chacko, former Indian footballer, will now execute the role of a coach by training kids in a summer training camp organised at the Othara UP School in Pathanamthitta.

Children aged between 6 and 16 will be provided training at the camp. Interestingly, it was on the same school ground that Chacko kick-started his footballing career.

"I joined the school back in 1976. Philip sir, who was the sports teacher of the school at that time, trained me as a footballer. So, it is a great honour and gift for us to impart the knowledge to young kids through this camp," he said.

Chacko was one of the top goalkeepers of the Kerala Police team. He was the goalkeeper of the 1989 Kerala side that competed in the Santosh Trophy. He continued to be in this role for eight long years.

He won several accolades and participated in the 1991 President Gold Cup, Super Soccer Tournament, and SAF Games held in Sri Lanka. He also took part in the Federation Cup.

He won the president's gold medal in 2017. He retired as a DySP.