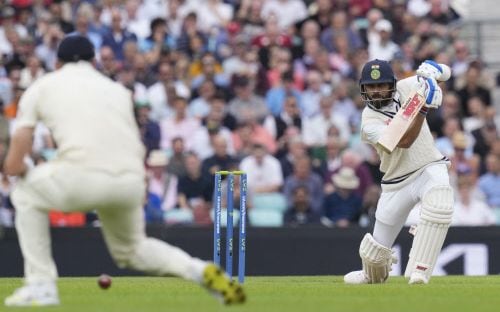 Virat Kohli plays a shot on the first day I Photo: AP

London: England pushed India into a corner, leaving them at 122/6 at tea on the first day of the fourth Test at The Oval. India, who lost three wickets in the first session, lost three more in the second session.

Ravindra Jadeja, promoted to No. 5, was out in the slips off the bowling of Chris Woakes for 10. Then, skipper Virat Kohli, who looked the best of the Indian batsmen, was caught behind off Ollie Robinson for 50. This was Kohli's 27th Test half-century and comprised eight fours.

At the stroke of tea, vice-captain Ajinkya Rahane was dismissed, caught in the slips off Craig Overton for just 14. Earlier, in the first session, England removed the top three as the visiting side went to lunch at 54/3.

The Indian openers started well to reach 28/0 in first seven overs, especially with K.L. Rahul playing some lovely drives. But Chris Woakes, introduced in the ninth over, dismissed Rohit Sharma (11) with an absolute peach of a delivery. Nipping off the pitch with extra bounce from short of length, Woakes forced Sharma to play at it. The ball took the outer edge of the shoulder of the bat to wicketkeeper Jonny Bairstow.

Rahul (17) became the second wicket to fall in the 14th over when a full nip-backer from Ollie Robinson crashed high into the back pad. Rahul took the review but replays showed the ball hitting the top of middle-stump.

Cheteshwar Pujara stopped a run of seven maidens with a flick through square leg. But he couldn't last long as James Anderson dismissed him for the 11th time in Test cricket. Anderson got the outswinger to move away in the 20th over. Pujara (4) charged down to prod but nicked behind to Bairstow.