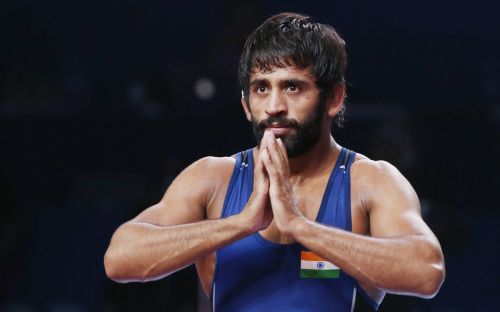 Birmingham: Star Indian wrestler Bajrang Punia reached the semifinal of the men's freestyle 65 kg category after Jean Guyliane Joris Bandou of Mauritius in the quarterfinal at the ongoing Commonwealth Games 2022 in Birmingham on Friday.

Bajrang was at his very best in the match as he gained a 6-0 win by fall. The match lasted for just one minute. He did not even give his Mauritius opponent a chance to score.

Bajrang will take on England's George Ramm in the semifinal.

Bajrang Punia entered the quarterfinal of the men's 65 kg category after defeating Lowe Bingham of Nauru in his campaign opener at the ongoing Commonwealth Games 2022 in Birmingham on Friday.

Punia was extremely dominant in his match and scored a 5-0 win in a bout that lasted for one minute and 47 seconds. He scored the win via fall.

Deepak Punia also marched to the semifinal of the men's freestyle 86 kg category after a win over Sheku Kassegbama of Sierra Leone in the quarterfinal.

His match lasted for just one minute and 33 seconds. Deepak emerged victorious 10-0, on basis of technical superiority over his opponent.

Also, wrestler Mohit Grewal reached the semifinal of the men's freestyle 125 kg after defeating Alexios Kaouslidis of Cyprus in the quarterfinal.

Grewal won by 10-1, on basis of points scored over the opponent. Kaouslidis did not get a lot of chances to score and had to settle for a solitary point.

Indian wrestling contingent started their campaign at the CWG 2022 today.

A year on from historic bronze in Tokyo Olympics, Sreejesh says he still has goosebumps