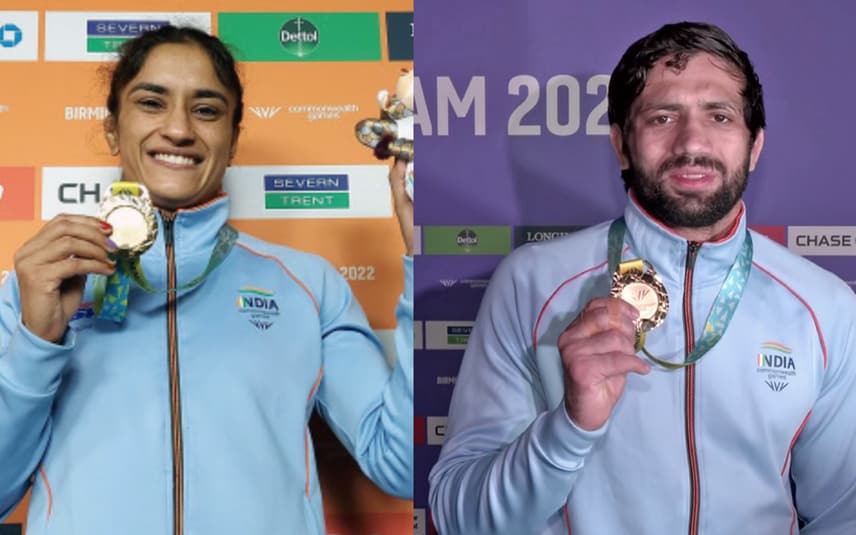 Birmingham: Putting aside the mental and physical struggles that pegged her back, an intimidating Vinesh Phogat pounced on her rivals to complete a hat-trick of CWG gold medals while Ravi Dahiya too went unchallenged as Indian wrestlers wrapped up their campaign with a rich haul of 12 medals, here Saturday.

Vinesh became the first Indian woman wrestler to win three consecutive Commonwealth Games gold medals and the country, like the last edition, succeeded in winning medals in all 12 categories.

In what was expected to be a tough opener against world championship bronze medallist Samantha Leigh Stewart, Vinesh reduced it to a no-contest and finished it in mere 36 seconds.

Vinesh had the Canadian in a head lock from where she pushed her on the mat and in no time pinned her rival.

Even before people could warm up to the contest, it was all over.

Next up for the 27-year-old Vinesh was Nigeria's Mercy Bolafunoluwa Adekuoroye, who tried to resist a bit but soon the Indian had her in an iron grip. Vinesh kept her in that position for more than a minute in a magnificent show of power, winning 6-0.

With only four wrestlers in the women's 53kg draw, Vinesh now needed to beat Sri Lanka's Chamodya Keshani Maduravlage Don and she did it in style, winning 'by fall' to clinch her third successive gold.

Vinesh has been struggling for form and fitness ever since her defeat at the Tokyo Games, where she made a shock first-round exit after entering the field as a strong contender for the gold medal.

Tokyo Games silver medallist Ravi was also too good for the 57kg field. He won both his bouts -- against Suraj Singh of New Zealand and Pakistan's Asad Ali -- by technical superiority en route the final.

In the final, Nigeria's Ebikewenimo Welson showed an intent to fight but the level at which Ravi wrestles, it was a tough task.

Ravi foiled a right leg attack and on next try of the Nigerian, he scored on counter-attack, effecting a take-down move with ease.

Soon he had trapped Welson in leg-lace and rolled him thrice for a 8-0 lead. Ravi completed the formality with another take-down.

In the final bout against Pakistan's Tahir Muhammad Sharif, the 19-year-old Naveen won 9-0. It is India's first major title in this category since Sushil Kumar's title triumph in 2018 Gold Coast Games.

In the women's 50kg, Pooja Gehlot made a confident start with a TSU win over Scotland's Christelle Lemofack Letchidjio and then got a walkover from Cameron's Rebecca Ndolo Muambo to make the semifinal stage with ease.

However, she lost the last-four clash 6-9 to Canada's Madison Bianca Parks.

Later she won the bronze play-off against the Scottish player 12-2. Since only six wrestlers featured in this category, it was competed in Nordic style where all wrestlers, divided into two groups, competed once against each other.

In the last Indian bout in the competition, Deepak Nehra (97kg) outplayed Pakistan's Tayab Raza 10-2 in the bronze play-off as the country signed off from the wrestling competition with a high success rate. PTI