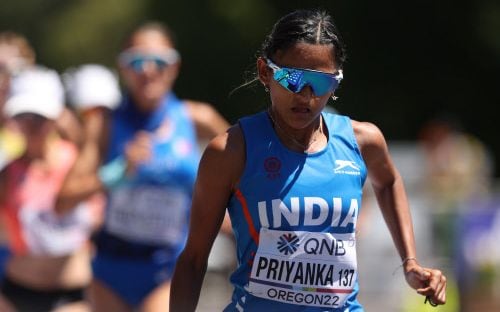 Birmingham: India bagged its third medal in track and field events after Priyanka Goswami managed to win silver in the women's 10,000 m race walk at Commonwealth Games 2022 on Saturday.

26-year-old grabbed a medal in CWG after achieving a personal best timing of 43:38.82 in the finals of the 10,000m race. This is India's 27th medal in the event. Earlier, she had competed in the Tokyo Olympics, but only managed to finish in the 17th position.

Meanwhile, the women's doubles duos of Manika Batra and Diya Prayag and Sreeja Akula and Reeth Tennison advanced to the quarterfinals after securing impressive wins on Saturday in their round of 16 matches.

Manika-Diya defeated Oumhani Hosenally and Nandashwaree Jalim of Mauritius by 3-0. The other Indian women's doubles duo of Sreeja Akula and Reeth Tennison was also impressive in their 3-0 win over Anna Chloe Thomas Wu Zang and Lara Whitto of Wales.