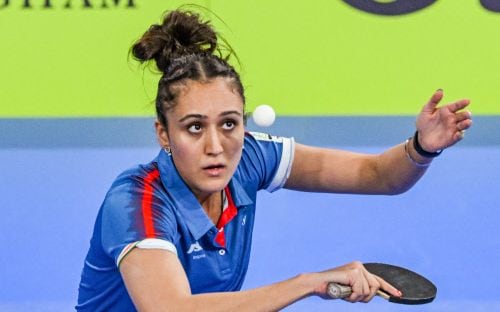 Birmingham: The ninth day of India's Commonwealth Games 2022 started on a positive note as in the sport of table tennis, the women's doubles duos of Manika Batra and Diya Prayag and Sreeja Akula and Reeth Tennison advanced to the quarterfinals after securing impressive wins on Saturday in their round of 16 matches.

This Indian duo won against their opponent by 11-5, 11-5, 11-3. Manika and Diya were off to a good start as they won the first game convincingly. They did not look back from there and followed it with two more wins to seal the match and book their ticket to the quarterfinal.

The other Indian women's doubles duo of Sreeja Akula and Reeth Tennison was also impressive in their 3-0 win over Anna Chloe Thomas Wu Zang and Lara Whitto of Wales.

Akula-Tennison emerged victorious in this one-sided match by 11-7, 11-4, 11-3 to book their slot in quarterfinal. The Welsh duo was not given too many chances to cut the deficit and lost the match within three games.

There is a lot of exciting table tennis action for fans today.

Table Tennis player Achanta Sharath Kamal will be playing in his quarterfinal match from 2:40 PM onwards.

At 3:25 PM, Sathiya Gnanasekaran and Sanil Shetty will be playing their respective quarterfinals in men's singles table tennis.

Sreeja Akula will be playing in the women's singles category semifinal in table tennis from 4:10 PM onwards.

Sathiya Gnanasekaran and Achanta Sharath Kamal will play the semifinal of the men's doubles category in table tennis from 4:55 PM onwards.

From 6:00 PM, the table tennis mixed doubles team of Achanta Sharath Kamal and Sreeja Akula will play their semifinal clash.