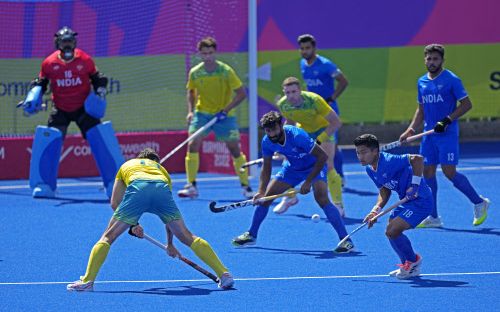 Birmingham: Australia demolished India 7-0 in the men's hockey final on Monday to maintain their perfect record at the Commonwealth Games and end their gold medal hunt in style.

The six-time defending champions showed their opponents no mercy in sweltering conditions on the final day of sporting action in Birmingham.

Australia have won every gold medal in men's hockey since the sport joined the Commonwealth Games programme in 1998.

The dominant Australians were 2-0 up after the first quarter and two goals from Jacob Anderson helped put them 5-0 up after 30 minutes.

Nathan Ephraums scored his second to make it 6-0 and Flynn Ogilvie completed the rout early in the final quarter.

Australia's Blake Govers said the team had saved their best performance until last.

"That's what we pride ourselves on," he said. "It's awesome to do it without too much of a heart problem.

"We had to play with confidence and play forward and take the game on from the start, and that's what we did. That's the difference between the two games (final and semi-final against England)."

Australia have topped the medals table with 67 golds -- 10 ahead of England. Canada are third with 26 golds and India have 22.

The closing ceremony takes place at Alexander Stadium later on Monday, bringing to an end 11 days of sporting action at the 22nd Commonwealth Games.

"The best two weeks of my 40 years of life," said the winner, who won three golds and a silver in Birmingham. "It can't get better."

Birmingham 2022 CEO Ian Reid said the Games had been a huge boost for the city and the surrounding area.

He said more than 1.5 million tickets had been sold, with most venues above 90 percent capacity.

"One of the goals at the outset was to put the city on the world map and instil that huge pride across everyone that lives in the region and I think we've achieved that," he told a briefing on Monday.

"I think that can lead to much bigger and greater things."

Commonwealth Games Federation CEO Katie Sadleir said there had been "huge engagement" with the Games globally.

She added that a number of countries had expressed an interest in staging future Commonwealth Games, including African nations.

She said Birmingham, which already had many facilities in place, could be a blueprint for future Games.

"It is definitely not something we want people to spend huge amounts of money and capital investment if it is not needed and desired by the long-term plans for the country," she said.

British Prime Minister Boris Johnson said the Birmingham Games had been a "shining example of the power of sport" to strengthen ties between Commonwealth nations.

He added: "When the athletes fly home and the banners come down, it's the people of the West Midlands who will reap the rewards from the lasting economic legacy these Games have secured."

The Games were backed by £778 million ($943 million) of public funding, including £594 million from central government.