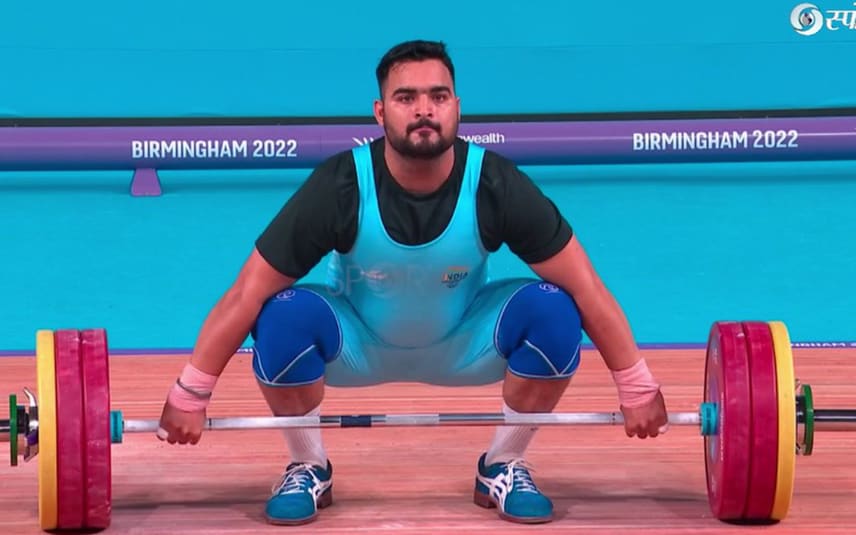 Birmingham: Indian weightlifter Lovepreet Singh added another medal to India's tally after capturing a Bronze medal in the final of the Men's 109 kg category at the ongoing Commonwealth Games 2022 in Birmingham on Wednesday.

He finished with a combined lift of 355 kg. It consisted of 163 kg in his final Snatch attempt and a best of 192 kg in the Clean and Jerk category.

Cameroon's Junior Periclex Ngadja Nyabeyeu took home the Gold with a combined lift of 361 kg, which consisted of the best lift of 160 kg in the Snatch category and the best of 201 kg in the C&J category.

The silver medal went to Samoa's Jack Hitila Opeloge who had a combined lift of 358 kg. It consisted of the best lift of 164 kg in the Snatch category and 194 in the C&J category.

Lovepreet Singh was off to a great start. He lifted a solid 157 kg in the first Snatch attempt and he took the lead after this.

His other opponents outdid him and he was dethroned from the first spot. His second Snatch attempt was an impressive 161 kg, which once again placed him at the top.

However, in his final attempt, Canada's Pierre-Alexandre Bessette lifted an impressive 163 kg, which pushed him to number one and Lovepreet was thrown at number two.

Lovepreet responded with an amazing 163 kg lift in his final Snatch attempt. He finished the Snatch event tied with Bessette for the second position. At the first position was Samoa's Jack Hitila Opeloge, who lifted a fantastic 164 kg in his final attempt.

Cameroon's Junior Periclex Ngadja Nyabeyeu was at the third spot with a lift of 160 kg.

With the Indian in medal contention, things moved to the Clean and Jerk event.

Lovepreet lifted an impressive 185 kg in his first attempt in C&J, which strengthened his top position chances.

He followed this with an even better lift of 189 kg in his second attempt, which improved his combined lift from 348 kg to 352 kg.

However, some contestants were yet to complete their C&J attempts and Lovepreet had to wait to see if he could finish at a podium position, preferably the topmost one which he had occupied.

In the end, Lovepreet had to stay content with a bronze medal as he finished with a combined lift of 355 kg. ANI