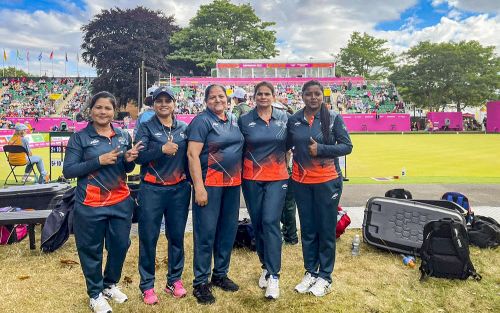 Birmingham: Lovely Choubey, Rupa Rani Tirkey, Pinki and Nayanmoni Saikia bagged gold for India, the country's first medal in the discipline, by beating South Africa 17-10 in the finals of Lawn Bowls at the Commonwealth Games on Tuesday.

South Africa cut India's early lead from 8-2 to 8-8 at the end of End 9. Following this, South Africa showed their experience in the event by upping the lead to 10-8 after 11 ends of throws. However, India managed to grab the much-needed lead of 12-10 after end 13. South Africa's brief lead in the end 12 came to an end abruptly after India finished the game 17-10 after 14 ends of throws.

Earlier, India started the final in high spirits after taking 1-0 after End 1. However, South Africa came back strong after End 2 with a 2-1 lead. But India improved to 3-2 after four ends. India continued the momentum and improved from their early sloppy throws to increase the lead to 4-2 after five ends. After End 6, India's lead reached 8-2, a solid performance from the Indian team in CWG 2022. SA came back strong and went level with India at 8-8 after End 9.

Earlier, the Indian team defeated New Zealand 16-13 in the semi-final to earn a maiden final appearance in the women's fours format of the competition.

Against New Zealand, after conceding a 0-5 lead after the second end, the Indian team came back strongly. After end-14, New Zealand was marginally 13-12 ahead.
However, a brilliant shot from Tirkey helped India seal the game with a 16-13 scoreline.