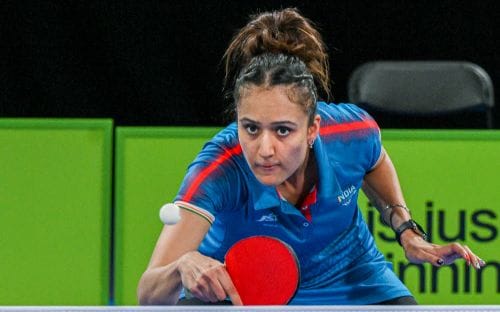 New Delhi: There is a lot of action on cards for Indian fans on the ninth day of Birmingham Commonwealth Games 2022 with wrestlers poised for action again, a day after six wrestlers bagged medals. India will be looking forward to progressing further in the knockout stages in sports like Cricket, Badminton, Hockey, and Table Tennis.

The Women's doubles teams of Sreeja Akula and Reeth Tennison and Manika Batra and Diya Chatale will be playing their round of 16 match to start off the action for the day.

The Women's doubles teams of Sreeja Akula and Reeth Tennison and Manika Batra and Diya Chatale will be playing their round of 16 match to start off the action for the day.

Table Tennis player Achanta Sharath Kamal will be playing in his quarterfinal match from 2:40 PM onwards.

From 2:50 PM will take place the Women F55- 57 Shot Put Finals in which Poonam Sharma, Sharmila and Santosh will be participating for India.

From 3:00 PM onwards in Athletics, women's 10 km walk final will take place in which Bhawna Jat and Priyanka Goswami will be participating.

At the same time in boxing, Nitu Ganghas will be fighting in her Over 45 kg to 48 kg semis against Priyanka Dhillon of Canada.

Wrestling action will take place from 3:00 PM onwards as well with Pooja Gehlot, Naveen, Pooja Sihag, Vinesh Phogat, Ravi Dahiya and Deepak Nehra in action in their matches. Sihag, Dahiya and Nehra will be playing in the quarterfinals of their respective categories.

At 3:25 PM, Sathiya Gnanasekaran and Sanil Shetty will be playing their respective quarterfinals in men's singles table tennis.

From 3:30 PM onwards, two high-profile events will take place. Amit Panghal will be boxing Patrick Chinyemba in semis of over 48-51 kg finals.

On the other hand, the Indian women's cricket team will be eyeing to confirm a medal during semi-final against England.

Sreeja Akula will be playing in the women's singles category semifinal in table tennis from 4:10 PM onwards.

From 4:20 PM onwards, Avinash Sable will be participating in the men's 3000 m steeplechase final. Also at the same time, Badminton star PV Sindhu will be playing in her women's singles quarterfinals.

Sathiya Gnanasekaran and Achanta Sharath Kamal will play the semifinal of the men's doubles category in table tennis from 4:55 PM onwards.

In Squash, the duo of Senthilkumar Velavan and Abhay Singh will play the men's doubles quarterfinal from 5:15 PM onwards.

From 6:00 PM onwards, Aakarshi Kashyap will be playing in her women's singles quarterfinals in Badminton.

At the same time, the table tennis mixed doubles team of Achanta Sharath Kamal and Sreeja Akula will play their semifinal clash.

Action will shift to Squash from 6:45 PM onwards, when mixed doubles team of Dipika Pallikal and Saurav Ghosal will play their semifinal.

Boxing champion Nikhat Zareen will be fighting in her Over 48-50 kg semis against Savannah Stubley of England from 7:15 PM onwards.

From 8:00 PM onwards, boxer Jaismine Lamboria will be participating in semifinal of Over 57-60 kg against Gemmah Richardson of England.

Vinesh Phogat will be in action once again from 9:30 PM onwards.

Badminton stars Lakshya Sen and Kidambi Srikanth will be playing in their quarterfinal from 10:00 PM onwards.

Indian mens' hockey team will be playing their semifinal from 10:30 PM onwards against South Africa.