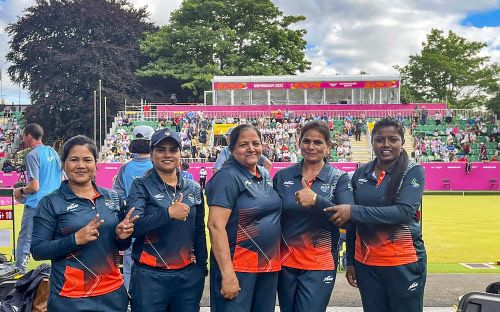 New Delhi: After an amazing fourth day of Commonwealth Games 2022 in Birmingham where the Indian contingent bagged three more medals- one silver and two bronze, India is all set for Day 5, which will see some of the biggest medal hopes in action. Today also marks the beginning of track and field events.

India will be looking forward to create history in Lawn Bowls by winning a Gold medal, while aiming for progress and medals in Badminton, Table Tennis, Weightlifting etc.

The action will start with Lawn Bowls from 1:00 PM onwards. The Indian Women's Team will play New Zealand in Pairs and Triples category.

From 2:00 PM onwards, Indian weightlifter Punam Yadav will be in action in the finals of Women's 76 kg category, looking forward to win another medal for India in this sport.

The Indian Athletics contingent will start its campaign from 2:30 PM onwards, with Murali Shreesankar and Muhammed Anees Yahiya taking part in Men's Long Jump qualifying round.

From 3:04 PM onwards, Srihari Natraj will take part in Men's 200 m Backstroke Heat, where he will be looking forward to doing well to win a ticket to final. This will be followed by Advait Page taking part in Heat 1 of the Men's 1500 M Freestyle event.

Men's Vault final will take place from 5:30 PM onwards. India's Satyajit Mondal will be taking part in this event.

From 6:00 PM onwards, Indian Men's Table Tennis team will take part in the Gold Medal match depending on their qualification.

From 6:30 PM onwards, two big matches will take place. Indian women's hockey team will be looking to continue their winning ways against England in their Pool A match. Also in the Men's 96 kg category, weightlifter Vikas Thakur will be looking forward to bring home another medal.

From 8:30 PM onwards, action will be coming from Squash courts, with India's Sunayna Kuruvilla taking part in Women's Singles Plate Semifinal against Faiza Zafar of Pakistan.

From 8:45 PM, the focus will once again be on Lawn Bowls. Men's Fours team will kickstart their campaign against Fiji in Round 1 while the Women's Triples team will be playing Round 2 against England.

Saurav Ghosal will be playing in semi-finals of Men's Singles Squash against Paul Coll of New Zealand from 9:15 PM onwards.

Indian Badminton team will be looking forward to clinch a Gold medal in the final of the Mixed Team event. The action for this will start from 10:00 PM onwards.

At 11:00 PM, action will be returning to weightlifting, with final of Women's 87 kg set to take place. Usha Bannur NK of India will be taking part in this event.

If Srihari Nataraj does well in his Men's 200 M Backstroke Heat 2, he will play in finals from 11:43 PM onwards.

Boxing action will kick off from 11:45 PM in Over 63.5-67 kg category with Rohit Tokas taking on Alfred Tokey of Ghana in his round of 16 bout.

From 12:03 AM onwards will start the qualifying round of Men's High Jump. Tejaswin Shankar will represent India in this.

Women's Discus Throw final will take place from 12:52 PM onwards, where Seema Punia, Navjeet Kaur Dhillon will be in action.

Commonwealth Games 2022 started in Birmingham from July 28 and will go on till August 8.