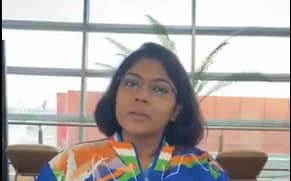 Bhavina got off to a good start as she took a lead in the first game but Shackleton bounced back. However, the Indian paddler continued her fine form and won the first game 11-7.

The second game started off with both players fighting hard for the points. After an intense battle, Shackleton got the better of Bhavina in the second game and won it 11-9.

In the third game, the battle went down the wire, but Bhavina won 17-15.

In the fourth game points were tied at 11-11 but Bhavina finally won 13-11 and sealed the match.

Also, India paddler Sonal Patel suffered a defeat against China's Qian Li by 3-2 in her opening match of Group D in women's singles - class 3 on Wednesday.