Exit from Barcelona was difficult, but the moment I arrived here, I've been very happy: Messi 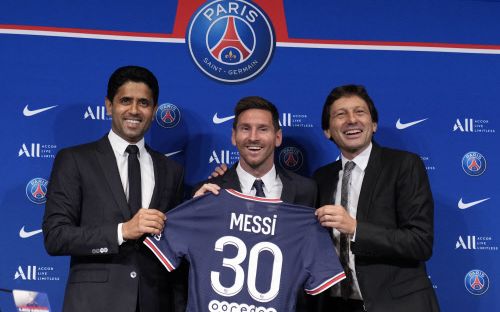 Paris: Lionel Messi on Wednesday said his exit from Barcelona has been difficult, but he is pleased to join French club Paris Saint-Germain (PSG).

"My exit from Barcelona has been a difficult change but the moment I arrived here, I've been very happy. I've enjoyed my time in Paris from the first minute," Messi said at a press conference on Wednesday.

"I am very grateful that such complicated negotiations were made so easy. Truly. I feel this club is ready to fight for every title," he added.

Talking about his stint with PSG, Messi said: "The team here is incredible. There have been some amazing signings. This will be an unbelievable experience for me. I do not know when I will first be able to play and I might need some pre-season conditioning first."

Earlier, Ligue 1 club Paris Saint-Germain had announced the signing of popular footballer Lionel Messi on a two-year contract with an option of a third year.

"The signing of Lionel Messi reinforces Paris Saint-Germain's aspirations as well as providing the club's loyal fans with not only an exceptionally talented squad, but also moments of incredible football in the coming years," read an official statement by the club.

Meanwhile, Brazil striker Neymar Jr also had posted an Instagram story with Messi on Tuesday and he captioned it as: "Back together".

Neymar and Messi used to be teammates while playing for Barcelona, but the duo parted ways after the Brazilian striker signed with PSG.

Messi was left in tears while bidding adieu to Spanish club Barcelona. Messi had then in a press conference admitted that his signing with PSG remains a possibility.