Staying away from mat for 20-25 days affected my Olympics preparations: Bajrang Punia 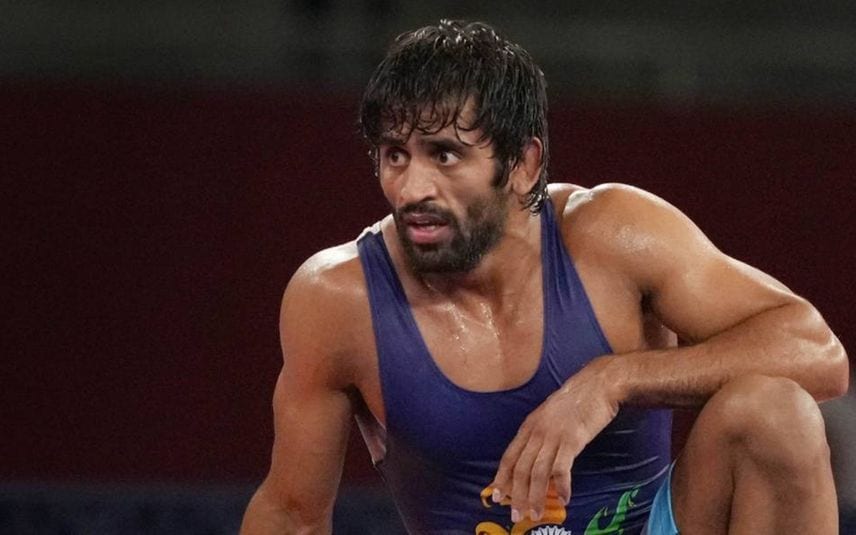 New Delhi: Star India wrestler Bajrang Punia on Sunday revealed that his knee injury forced him to skip mat training for nearly three weeks which severely hampered his Olympic preparations and he took the mat for the bronze play-off without any knee protection, going against the advice of his support staff.

Bajrang had skipped the Poland Open, the last ranking event before the Tokyo Games, arguing that he needed training more than the points and headed to Russia, where he trained and also ended up injuring his right knee by choosing to compete in a local event -- Ali Aliev tournament.

On June 25, competing in the semi-finals of tournament against Abulmazhid Kudiev, the Under-23 European silver medallist, Bajrang endured a painful move and suffered the injury.

Bajrang was off-colour in his first three bouts in Tokyo but played his usual tactical and aggressive game in the do-or-die bronze medal bout and comfortably beat Daulet Niyazbekov from Kazakhstan to earn a podium finish on Olympic debut.

"I could not do mat training for nearly 25 days. I was not able to run as well after the injury. Before a tournament like Olympics even missing one day's training is not good," Bajrang said during a media interaction.

"My coaches and physio wanted me to continue to play with taped knee in the bronze bout. But I don't feel comfortable. It feels like someone has tied my leg, so I told them even if injury happens I can rest later but if I don't win medal now all the work will be lost, so I went all out," he said.

"The doctors wanted me to come back to India for treatment (from Russia) but I told them it was not possible (at that time). And there was a risk of getting the virus (COVID-19) during the travel.

"So I did my rehab in that small Russian village and got all the equipments that I needed with the help of Indian embassy in Moscow," he said.

Asked why he chose to compete when he had skipped the Poland Open to train, the 27-year-old said he needed to assess himself.

"Injuries can happen in training also. And most of the injuries happen during training because in the tournaments you are completely focussed. In training, you do a lot of different things.

"I needed to see where I stand in terms of preparations, so I had to compete," he said defending his decision.

The 27-year-old said he will continue to compete in the 65kg category till the Paris Games.

"There is no scope to move to 74kg. Next year we have the CWG and the Asian Games. I have missed the gold medal now but will work on my weaknesses and try to get a top-finish in Paris," he said.

Bajrang said he will start rehabilitation after going home and will get ready for the World Championships, set to be held in Oslo, Norway from October 2-10.

The Haryana wrestler also said that a lot of athletes succumb to pressure but he is comfortable carrying the weight of expectations.

"I have seen people crumble under pressure. It mostly happens with the new athletes but I feel happy when people tell me that they want to see me win Olympic medal.

"Pressure gives you nothing, so we must learn to play freely."

Asked if he would like to continue with his Georgian coach Shako Bentinidis, Bajrang said, no discussion has taken place on the subject as yet.

He also revealed that he was so upset after his semifinal defeat against Azerbaijan's Haji Aliev that he confined himself to his room and did not want to talk to anyone.

"I went to sleep but I could not sleep. I hardly slept for 2-3 hours. I was in a pretty bad mood and did not want to talk to anyone."

Unlike other wrestlers, weight-cut is not an issue that bothers Bajrang much and now he wants to go home and eat 'Choorma' that his mother Om Pyari prepares for him whenever he gets back home.

"Win or defeat, I get Choorma at home and I will eat that. maintaining weight is not a problem for me," he said.

Bajrang also advised that sports should be encouraged at all school and University level in the country, just like it happens in China and USA for India to unearth more talent.