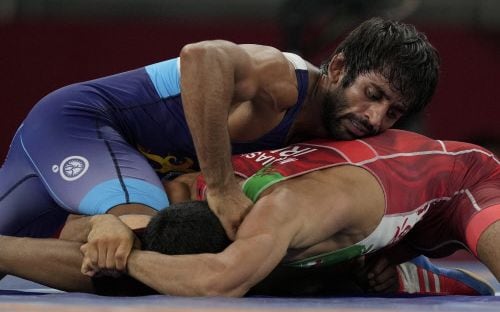 Tokyo: Bajrang Punia progressed to the semi-finals of the men's freestyle 65kg event at the Tokyo Olympics after defeating Iran's Morteza Ghiasi Cheka here at the Makuhari Messe Hall A -- Mat A on Friday.

Bajrang defeated Iran's Morteza Ghiasi Cheka by pinning him down to the mat (victory by fall) in the 1/4 Final. The number two seed Indian started the cagey contest on the back foot as he conceded a shot clock for passivity and gave one point to Morteza Ghiasi Cheka going into the second period.

There was no respite even in the second half for Bajrang as the referee again charged the Indian for passivity but this time the 27-year-old held his nerve and showed his proper class against Ghiasi's right leg hold as he defended brilliantly. But soon Punia prevailed after a brilliant takedown of the Iranian which gave him the two points and in sequence, he pinned the Ghiasi to move into the next round.

Bajrang will now face the reigning Olympics medalist Azerbaijan's Haji Aliyev in the last four. Earlier in the day, Bajrang Punia progressed into the quarter-finals after defeating Ernazar Akmataliev of Kyrgyzstan. The bout between Bajrang and Akmataliev ended with a score tied on 3-3 but the Indian prevailed because he had the criteria with him (higher point-scoring move, a 2-pointer in the first period) in the 1/8 Final. (ANI)