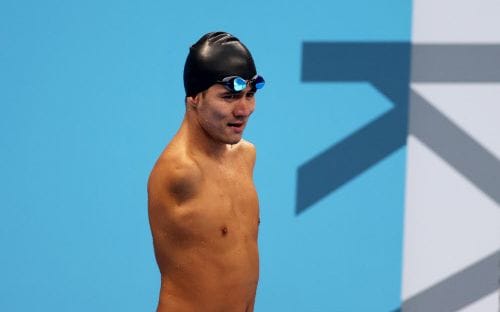 Tokyo: Afghanistan-born swimmer Abbas Karimi set his sights on becoming the first refugee team member to win a Paralympic medal on Friday, almost a decade after he fled his homeland seeking a new life.

Karimi qualified for the final of the men's S5 50m butterfly and said afterwards his "thoughts and prayers" were with the Afghan people after the Taliban takeover.

The swimmer is one of six athletes representing the Refugee Paralympic Team in Tokyo, having fled the conflict in Afghanistan at the age of 16 and eventually settling in the United States.

He qualified for Friday's final with a time of 36.36sec in third place in his heat, and said his sights were now firmly set on Paralympic gold.

"If I don't go for a medal, all the training, all the hard work will be just a waste of time," said the 24-year-old, who was born with no arms.

"We always train for a purpose, for a goal, and that's the gold. I'm going to go for the gold."

Afghanistan's team is not in Tokyo, after the country's Paralympic committee said it was "unable to compete" in the wake of the Taliban's return to power.

The team, made up of just two taekwondo athletes, has since been evacuated from Afghanistan though officials have declined to say where they ended up.

Karimi said he was concentrating on his performance, but that the people of his former homeland were on his mind.

"Afghanistan people are in my thoughts and in my prayers," he said.

"I'm representing the refugees and 80 million displaced people, and I represent the world."

Karimi started swimming at the age of 13 and soon fell in love with the sport after overcoming his initial fear.

He decided to flee Afghanistan three years later with the help of his brother, and flew to Iran before embarking on a treacherous journey through the mountains into Turkey.

After four years there, he was granted permission to resettle in the US, and won a silver medal at the 2017 World Para Swimming Championships in Mexico.

Now he is aiming for Paralympic success as part of the refugee team, after carrying the flag at the opening ceremony along with team-mate Alia Issa.

"It means everything because I'm a refugee," he said.

"It makes a lot of sense to represent the refugee Paralympic team and represent millions of displaced people around the world. We just want to give the world hope."

Karimi is also competing in the S5 50m backstroke in Tokyo.

"It means everything, because for the past nine years I gave up everything to make it at this level, and here I am at the Paralympics 2020," he said.

"I'm very, very happy to be here, and I just want to say thank you to the Japanese people and all the volunteers -- they've been so nice, so kind."