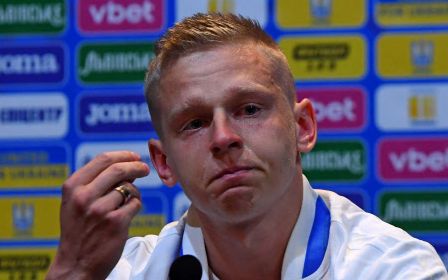 Glasgow: Ukraine's Oleksandr Zinchenko broke down in tears on Tuesday as he expressed what a place at the World Cup would mean to his war-torn homeland.

For the first time since Russia's invasion, Ukraine return to competitive action against Scotland in Wednesday's World Cup playoff semi-final at Hampden Park.

The match was postponed in March, just weeks after the war began, to allow Ukraine to fulfil the fixture.

Zinchenko thanked the Scottish side for their role in giving Ukraine the time they needed to prepare for the game.

The Manchester City defender was then overcome with emotion when asked what it would mean to bring some joy to his nation by reaching Qatar later this year.

"Every Ukrainian wants one thing - to stop this war," said Zinchenko.

"I've spoken to people from all over the world. Children who don't understand what is happening, they have one dream which is to stop the war.

"The Ukrainian team also have their own dream, they want to go to the World Cup. They want to give these incredible emotions to Ukrainians because Ukrainians deserve this at this time."

Zinchenko added that he had considered leaving England to join the Ukrainian forces before being convinced he could do more good raising awareness as a high-profile Premier League player.

He symbolically drapped the Premier League trophy in the Ukrainian flag as City claimed the title earlier this month and called for a united front from the football world to keep speaking out against the war.

"It is impossible to describe these feelings if you are not in this position. The things which is happening now in our country is not acceptable, it is something I cannot describe.

"We need to stop this aggression all together. Ukraine is a country of freedom, it will never give up.

"A lot of countries don't understand today it is Ukraine but tomorrow it can be you. So we need to be united and beat this Russian aggression all together."

Players contracted to Ukrainian teams have been allowed to leave the country to prepare for the game at a training camp in Slovenia.

In recent weeks they have been joined by Zinchenko and other key players plying their trade abroad such as West Ham's Andriy Yarmolenko and Benfica striker Roman Yaremchuk.

"It is clearly difficult to motivate the team for a game when all the players are thinking about their family back in Ukraine," said coach Oleksandr Petrakov.

"Clearly we use all sorts of methods. We even have jokes to try and keep the mood light but every player understands how huge the task is for tomorrow's game.

"I am working under a lot of duress and stress but we are trying our best to achieve results tomorrow." AFP