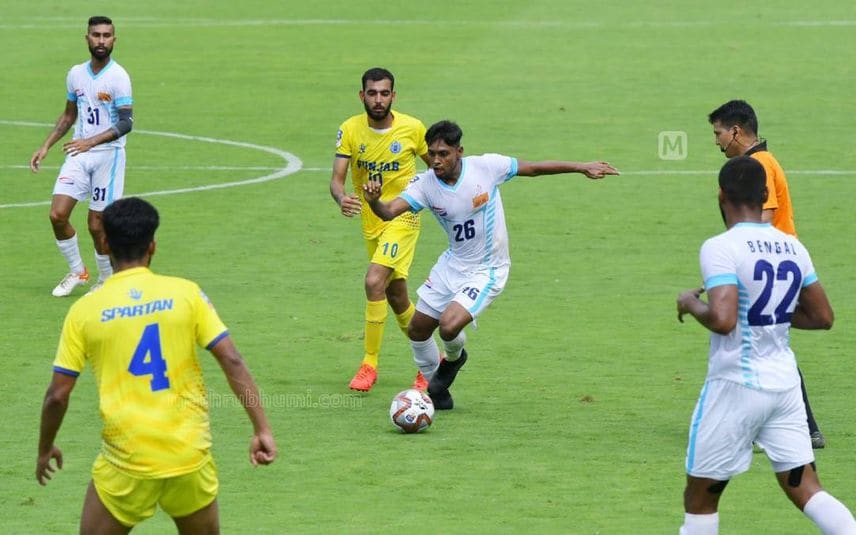 Malappuram: West Bengal kicked off their campaign in the 75th Santosh Trophy with a tightly fought 1-0 victory over Punjab in the opening game of the tournament.

Right from the start, the tournament's two most successful teams attacked with fervour, intent on grabbing all three points to gain a strong foothold in Group A.

The chances flowed at both ends fairly quickly but the two teams went into the break locked in a stalemate.

West Bengal took control of proceedings more forcefully in the second half, holding possession for longer and stitching neater passes in midfield. They got their reward in the 61st minute, with the youngster Sajal Bag, drifting wide, beating his marker and crossing into the box. His delivery found Shubham Bhowmick perfectly placed near the penalty spot and the forward's first-time volley hit the inside of the far post and bounced in, leaving Harpreet Singh helpless.

As the minutes ticked by, both teams got more desperate, Punjab pouring forward in numbers, and West Bengal packing bodies to defend their slender lead.

With the last minute came the final bit of drama. Sheikh was again at the centre of it, crossing perfectly from the left, to set up Akashdeep Singh inside the box. The forward had the goal at his mercy, the defenders and the goalkeeper beaten.

Unfortunately, he couldn't control his shot, or the pass, slicing wide, and falling to the grass in despair. West Bengal held on to ensure they had a winning start to the tournament.

In the second Group A fixture on Saturday, Kerala will take on Rajasthan at the Manjeri Payyanad Football Stadium in Malappuram.

Ahead of their first game of the tournament, Kerala Coach Bino George Chiramal Padinjarathala expressed his pleasure in "Kerala hosting the tournament after a long time."

"Football is a great sport. We know the responsibility that the Santosh Trophy brings with it. There is a massive fan following for the sport. We have the responsibility of performing for our fans. We have worked really hard in the training sessions. We have picked our team based on the players' fitness and made our combinations according to the teams we will be facing."

Kerala Captain Jijo Joseph, added: "I am excited to be a part of the Hero 75th National Football Championship for Santosh Trophy. I am sure our team will do our best to perform, especially in front of our home fans."

Rajasthan have qualified for the main round of the Santosh Trophy for the first time in over three decades. Rajasthan Coach and Captain spoke about the honour of getting a chance to compete for the trophy once again and added that they are ready for the teams they will face in Group A.

Meanwhile, Rajasthan Coach Preetam Kumar said: "It is a pleasure for us to qualify for the Main Round after 34 years. The boys have worked really hard on the training sessions and we are hoping for good results."

"We are very prepared for the match. We know Kerala are a very good and competitive team, but we have also prepared our tactics according to the opposition. We hope we will give the best competition to our opponents in the Group and advance to the next stage," Rajasthan Captain Maninder Singh added.

Meghalaya are the fifth team in Group A, which will begin its campaign on Monday against Rajasthan at Kottappadi Football Stadium.

Meghalaya Coach Bobby Lyngdoh Nongbet uttered: "We have been here for some time. We have been training really well in Kerala. The players are really sticking well. The conditions are quite hot as compared to our home. But the training sessions are helping us to prepare ourselves for the conditions. The team is doing really well."

Meghalaya Captain Hardy Cliff Nongbri maintained: "We have been training for the past few months. We have had campaigns and we have played some friendly matches in Assam. We have to stick to our basics. We have to adapt to the conditions and play accordingly."