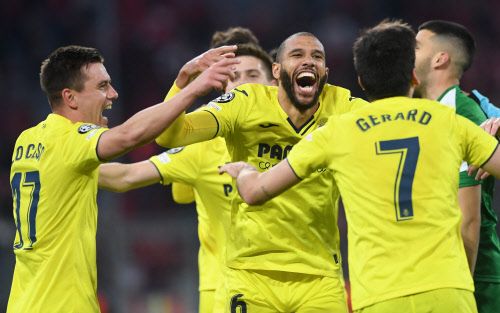 Leading 1-0 from the first leg, Villarreal snatched a 1-1 draw on the night and a semi-final place through Samuel Chukwueze's 88th-minute goal.

"Tonight they (Bayern) made the mistake of not killing us off and we took advantage of that," Moreno said.

On Monday, Nagelsmann said Villarreal had made a mistake by winning the first leg by a slender 1-0 margin "which allowed us to survive".

"In the first leg we made the mistake of not finishing them off. All the comments about that served as motivation," said Moreno, whose cross set up Chukwueze's tie-winning strike.

"What this team has done is great."

Robert Lewandowski had put Bayern ahead on the night to level the tie.

Unai Emery's Villarreal had already knocked out Juventus in the last 16 following a stunning 3-0 win in Turin.

"It's an extraordinary feeling, it was not easy for us. We are a small club, from a village, like that of Asterix and Obelix," said Emery.

"We are moving forward step by step, we had a very difficult quarter-final."

The Spaniards face either Benfica or Liverpool in the semi-finals. Jurgen Klopp's Reds take a 3-1 lead into Wednesday's second leg at Anfield.

"It's unbelievable, it's taken a lot of hard work," said Villarreal captain Raul Albiol, the man of the match in Munich, who at 36 is two years older than Nagelsmann.

"Our victories are as a team. We have suffered a lot in both games, but to be in the semi-finals is great for Villarreal.

"We knew it was going to be a long 90 minutes and we were going to suffer a lot.

"We want more. We see ourselves as causing problems to all our opponents."

Emery basked in the glory of a historic result for Villarreal in his 50th Champions League match as a coach.

"We took a lot of confidence from the first leg result, but we had to defend well and we tried to create our own chances -- we created five and took the final one," he said.AFP