The Ukrainian league, which was due to resume this weekend after its long winter break, has been suspended. 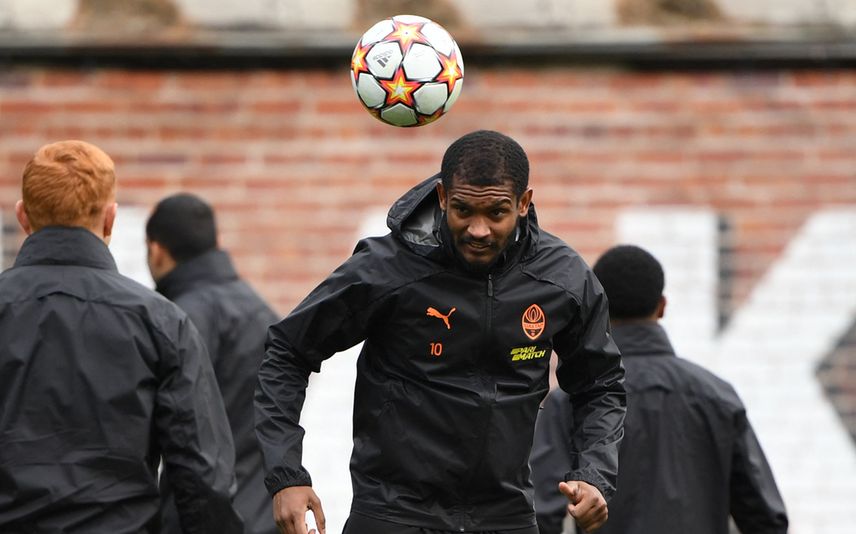 In this file photo taken on October 18, 2021 Shakhtar Donetsk's Brazilian defender Marlon (C) and teammates take part in a training session at the club's training ground outside Kiev on the eve of their UEFA Champions League football match against Real Madrid | Photo: AFP

UEFA will hold an emergency meeting on Friday with this season's Champions League final in Saint Petersburg set to be at the top of the agenda as European football's governing body said it "strongly condemns" Russia's military invasion of Ukraine.

"UEFA shares the international community's significant concern for the security situation developing in Europe and strongly condemns the ongoing Russian military invasion in Ukraine," it said in a statement on Thursday.

"We remain resolute in our solidarity with the football community in Ukraine and stand ready to extend our hand to the Ukrainian people."

UEFA said an extraordinary meeting of its executive committee would be held on Friday at 0900 GMT and a decision is likely to be made on this season's Champions League final.

The showpiece game of European club football's premier competition is scheduled to be played on May 28 at the Gazprom Arena in Saint Petersburg, which already hosted several matches at last year's European Championship and at the 2018 World Cup held in Russia.

"We are dealing with this situation with the utmost seriousness and urgency. Decisions will be taken by the UEFA Executive Committee and announced tomorrow," UEFA added on Thursday.

On Thursday the German club Schalke 04 said it would remove the logo of Gazprom, its main sponsor, from the team's shirts.

British Prime Minister Boris Johnson claimed on Tuesday that Russia had "no chance" of holding European football's showpiece game if it invaded Ukraine.

"A Russia that has pariah status -- no chance of holding a football tournament in a Russia that invades sovereign countries," Johnson said.

"No decision has been taken" by UEFA to move the final but it is "studying different options", a source with knowledge of the discussions told AFP.

There are currently four English Premier League clubs still involved in the last 16 of this season's Champions League, including Chelsea and Manchester City, who contested last season's final in Porto, Portugal.

UEFA has already moved the last two Champions League finals due to the Covid-19 pandemic from Istanbul to Lisbon in 2020, and then again from the Turkish city to Porto last year.

The latter move was made after the UK government placed Turkey on its coronavirus travel red list, meaning British football fans would not have been able to attend.

British media reports have suggested Wembley Stadium in London as a possible alternative venue for this season's final, despite the Euro 2020 final there last year being plagued by fan trouble.

The Champions League final was last staged in Russia in 2008, when Manchester United defeated Chelsea on penalties in Moscow.

Zenit Saint Petersburg, the reigning Russian champions and current league leaders, are still involved in UEFA competition this season and play Real Betis in Spain in the Europa League on Thursday.

The Ukrainian league, which was due to resume this weekend after its long winter break, has been suspended.

"We'll withstand it," posted Shakhtar Donetsk, the 13-time Ukrainian champions who have been exiled from their already war-torn home city for eight years, on Twitter with a picture of the Ukrainian flag.

Meanwhile both Russia and Ukraine are due to play decisive World Cup qualifying play-offs on March 24.

Russia are set to play at home to Poland while Ukraine will be away to Scotland in play-off semi-finals, with the finals to decide who goes to Qatar set for March 29.

Should Russia win against Poland they are scheduled to play at home to either Sweden or the Czech Republic five days later.