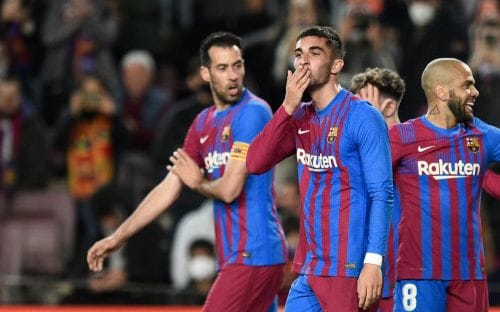 Ferran Torres (C) celebrates after scoring a goal I AFP

Madrid: Barcelona continued their La Liga resurgence on Sunday by blowing away Osasuna, with Ferran Torres and Pierre-Emerick Aubameyang on target again in a 4-0 win at Camp Nou.

Three goals in 14 minutes in the first half all but ended the match as a contest as Torres scored twice, the first a penalty, before Aubameyang prodded in a third. Riqui Puig rounded off the victory with 15 minutes left.

Focus now turns to two crunch games this week, against Galatasaray in the Europa League and then next weekend's Clasico against Real Madrid at the Santiago Bernabeu.

"If we play with this intensity, we can compete with anyone," said Xavi Hernandez.

A fourth consecutive league victory lifts Barca back up to third in the table, now only five points behind Sevilla and with a game in hand over Julen Lopetegui's side, whose title challenge looks to be over after they were held to a 1-1 draw by Rayo Vallecano.

Sevilla have drawn six of their last eight games in La Liga and their latest stumble at Vallecas means Real Madrid will move 10 points clear at the top if they win at Mallorca on Monday.

Barca have been closing the gap to Sevilla in recent weeks and can have genuine aspirations now of finishing second. Sevilla could even get pulled into the battle for the top four if their current slump continues.

While Sevilla have been hampered by absentees in recent weeks, Barcelona have been revitalised by reinforcements, their January business continuing to pay dividends in the form of Torres and Aubameyang.

The pair have five goals each now since joining in the transfer window and Barca have scored four goals in four of their last six games.

"Ferran has scored goals wherever he's been," said Xavi. "And Auba is a gift from heaven."

Xavi, who was appointed in November with Barcelona lying ninth, also has to take credit, with this Barcelona team now playing the kind of slick, quick, high-intensity football that looked impossible under Ronald Koeman.

Xavi has also successfully reintegrated Ousmane Dembele, despite the jeers of disgruntled fans in response to the Frenchman refusing to sign a new contract.

The whistles though have gone quiet now as Dembele registered two more assists against Osasuna and has been a key part of Barcelona's recent surge.

"If you play well, people are happy," said Xavi. "He is giving everything for Barca and you can't fake that."

Barcelona opened the scoring in the 14th minute when a nice move through midfield ended with Sergio Busquets popping a ball over the top for Torres, who was brought down by Nacho Vidal and slid the penalty into the corner.

Dembele was the instigator for the second, driving infield from the right and piercing the Osasuna defence with a superb pass through for Torres, who finished. The third was more straightforward, Dembele crossing to the near post, where Aubameyang did well to steer in on the stretch.

Gerard Pique, playing his 600th match for Barcelona, had a goal ruled out for offside before Puig, on as a substitute, followed up his own shot to make it four.

Sevilla could do with some of Barca's forcefulness in attack after they were held by Rayo Vallecano.

Lopetegui's side have struggled for goals in recent weeks and missed chances again, even if they were unfortunate to have a penalty cancelled following a VAR review in the second half.

Rayo will hope a draw against the second-placed team in the league can be a turning point for them after six consecutive league defeats.

A brilliant start to the season had newly-promoted Rayo dreaming of Europe but a dreadful recent run has seen them drop to 13th, with nervousness growing about relegation.

Bebe gave the home side the lead early in the second half, catching Bono by surprise with an early strike that flew inside the near post.

Sevilla equalised in the 63rd minute when Thomas Delaney crept behind Rayo's Fran Garcia at the back post and then Rafa Mir was brought down by Alejandro Catena, the referee pointing to the spot.

The decision, though, was reversed before Rayo had to survive more nervous moments in injury-time. AFP