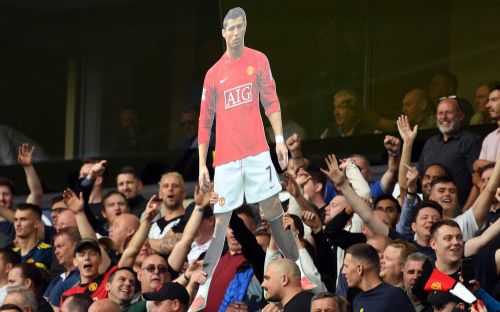 A cardboard cut out of Cristiano Ronaldo held by Manchester United supporters I Photo: AFPa

Manchester: The Instagram post by Premier League club Manchester United on the return of the Portuguese striker Cristiano Ronaldo has shattered the record on the social networking site.

But the record of most liked sports photo on Instagram still belongs to Paris Saint-Germain's Lionel Messi whose photo with the Copa America trophy went viral and has more than 21 million likes.

Manchester United on Friday confirmed that the club has reached an agreement with Juventus for the transfer of Cristiano Ronaldo, subject to agreement of personal terms, visa, and medical. They wrote on Instagram: "Welcome home, @Cristiano #MUFC #ManUtd #CristianoRonaldo #Ronaldo."

Cristiano is a five-time Ballon d'Or winner, has so far won over 30 major trophies during his career, including five UEFA Champions League titles, four FIFA Club World Cups, seven league titles in England, Spain, and Italy, and the European Championship for his native Portugal. In his first spell for Manchester United, he scored 118 goals in 292 games.