Lukaku scored the spot kick, but Sevilla fought its way back into the game with two headers from Luuk de Jong, setting the stage for Diego Carlos to hit his game-winning kick in the 74th. 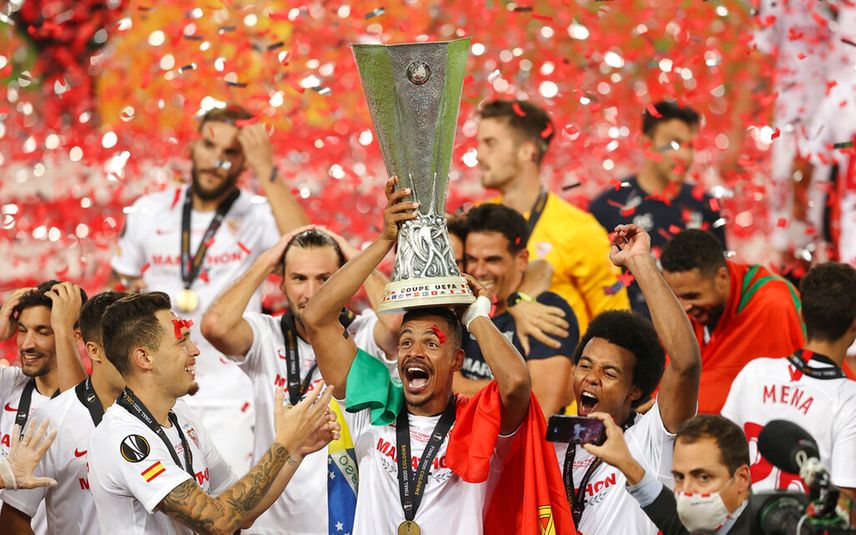 Cologne (Germany): The longest Europa League season came down to a defender's spectacular shot and a striker trying to keep it out.

Instead of blocking Diego Carlos' overhead kick — which was going wide — Romelu Lukaku deflected it into his own net. That handed Sevilla a 3-2 win in the final Friday and a record sixth Europa League title. And it gave Lukaku the distinction of scoring for both teams.

The Belgium striker had given Inter a perfect start with an early goal after winning his first duel with Diego Carlos, who could easily have been sent off in the process. The Brazilian defender was the last defender when he fouled Lukaku on a counterattack in the third minute but was only given a yellow card.

Lukaku scored the spot kick, but Sevilla fought its way back into the game with two headers from Luuk de Jong, setting the stage for Diego Carlos to hit his game-winning kick in the 74th.

"If you win the penalty and it's a red card, if indeed it was a red card, then ultimately the match would have been a lot less tough," Inter coach Antonio Conte said through a translator. "The referee made a decision in the end. That's the way he read this decision and there's also VAR, but we know VAR is used differently in every different country."

Conte also hinted he could leave Inter after his first season as coach brought runner-up finishes in Serie A and the Europa League. The loss extended Inter's wait for a first European trophy since Jose Mourinho led the Italian club to the Champions League title in 2010.

Sevilla has won the Europa League in four of the last seven seasons.

"This group deserve this. We've been fighting all season and getting over the problems that we've encountered," said Sevilla right-back Jesus Navas, who won his third Europa League with Sevilla — 14 years after his first.

The game started at breakneck pace despite being the 54th game of 2019-20 for both teams in a season extended because of the coronavirus pandemic.

After just three minutes Lukaku surged away with the ball when a Sevilla attacking throw-in was cleared, and Diego Carlos pushed him down as he prepared to shoot. Goalkeeper Yassine Bounou had played a key part in Sevilla's run to the final but could do nothing to stop Lukaku's powerful penalty kick into the bottom-left corner.

The lead lasted just seven minutes before Luuk de Jong leveled the score with a diving header off a cross from right-back Jesus Navas.

De Jong was rewarded with a start after scoring the winning goal as a substitute against Manchester United in the semifinals. The Dutch striker gave Sevilla a 2-1 lead in the 33rd with a header at the far post at a free kick, but three minutes later Inter scored in nearly identical fashion, Diego Godin heading in from almost the same position off Marcelo Brozovic's free kick.

De Jong put Sevilla in front 2-1 with a header at a free kick in the 33rd, but Inter defender Diego Godin responded with his own headed goal three minutes later. Lukaku could have put Inter back in front in the 65th when he burst in behind Sevilla's defense but Bounou charged out to block his low shot.

After Sevilla reclaimed the lead, Jules Koundé stopped Inter leveling once again when he cleared substitute Alexis Sanchez's shot off the line in the 82nd.

Sevilla coach Julen Lopetegui said he was delighted to win a trophy with Sevilla in his first job since spending barely three months in charge of Real Madrid in 2018. He had lost his job as Spain coach on the eve of the World Cup over his decision to take over Real.

"It was a very emotional game but in the second half we controlled the game a bit better we dug in," Lopetegui said through a translator, paying particular tribute to Diego Carlos. "He gave away the penalty then he scored that wonderful overhead kick."

In a season defined by the coronavirus pandemic, Sevilla finished with a player on the field who had his own season disrupted by a positive test for COVID-19.

Serbian midfielder Nemanja Gudelj was a late arrival to the Europa League tournament "bubble" in Germany after a period in isolation following his positive test last month. He didn't report any symptoms.

He was welcomed by his teammates with hugs last week and was a late substitute in the semifinal win over Manchester United before replacing Diego Carlos in the 86th minute of the final.