A fine second half brace from Md Fardin Ali Molla helped West Bengal ease past Rajasthan by a 3-0 margin in Group A game of the Hero 75th National Football Championship for Santosh Trophy at the Kottappadi Football Stadium here on Sunday. 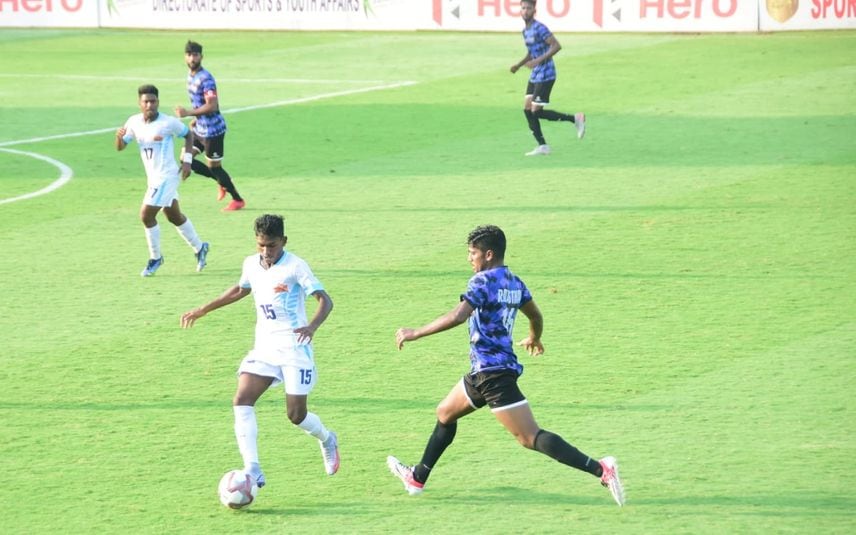 Malappuram: A fine second half brace from Md Fardin Ali Molla helped West Bengal ease past Rajasthan by a 3-0 margin in Group A game of the Hero 75th National Football Championship for Santosh Trophy at the Kottappadi Football Stadium here on Sunday.

With this win West Bengal joined Kerala in the last four.

The scoreline could have been much more emphatic if not for the profligacy displayed by the Bengal players throughout the game. They created numerous chances in the first half but could not break the deadlock going into the break.

The first chance for the 32-time champions came in the very first minute. A cross from the left wing found Srikumar Karjee in acres of space inside the box but he could not get a meaningful touch to divert the ball goalwards.

Bengal's first corner in the second minute of the game should have yielded their first goal but Sujit Singh blazed over the bar from close range. Bengal players tried to play the killer pass despite Rajasthan defending deep with numbers but their final product was lacking.

They resorted to playing down the flanks and utilised Jay Baz's crossing prowess to create scoring opportunities. Bengal's hero from their previous match Mahitosh Roy was guilty of missing two gilt-edged chances.

West Bengal players seemed to be playing within themselves, and their build-up play was often too slow or too elaborate which made it easier for the Rajasthan players to get a block in. Against the run of play, Rajasthan's Imran Khan found some space inside the box but his snapshot went over the bar.

Right on the stroke of half-time, Bengal created two glorious chances. The first one fell to Dilip Orawn who was placed right at the goal-line. It seemed easier to score than miss from that position but somehow the attacker contrived to blaze his shot over.

Next it was Md Fardin Ali Molla's chance to squander a very presentable opportunity. A brilliant whipped cross from the right flank by Jay Baz found the ATK Mohun Bagan wide man in space at the back post. He tried to go for an acrobatic finish instead of opting for an easier method and ended up shooting over.

The second half saw a much improved display from the Bengal players. Seconds after the restart, Bengal won a penalty. Dilip Orawn danced his way into the box and just as he was about to pull the trigger, he was tripped and the referee M Sugandar had no hesitation in pointing to the spot.

Md Fardin Ali Molla stepped up and slotted home the resultant spot-kick. Goalkeeper Gajraj Singh guessed the right way but the young attacker's shot had too much power. There was relief throughout the Bengal camp with coach Ranjan Bhattacharjee down on his knees to celebrate.

It did not take Bengal long to extend their lead. In the 59th minute, a fine cross from the right was met by Sujit Singh whose attempt was saved by substitute keeper Maninder Singh. But from the rebound, Md Fardin Ali Molla made no mistake and notched up his second successive brace of the tournament. He is now the second top-scorer of the tournament with four goals to his name.

Bengal made quite a few alterations towards the end of the game in a bid to test out their bench strength. The game lost a bit of momentum due to the numerous changes. However, Bengal were not done and in the 81st minute, they extended their lead even further.

Sujit Singh had numerous chances to score and he finally got on the scoresheet after brilliantly placing the ball with his left foot, just outside the reach of a diving Maninder Singh. Rajasthan had one final chance in the dying moments of added time to reduce the arrears. Imran Khan's shot was saved by Bengal's substitute goalie Raja Burman.

Rajasthan's campaign in the tournament after a gap of 34 years came to a disappointing end but the group will look to make the most of this opportunity in the future.

Bengal coach Ranjan Bhattacharjee, however, will be pleased with his side's defensive display on the day but he knows there are improvements to be done at both ends of the pitch if the team are to reach the final of the competition. They will face the runners-up team of Group B in the semifinals. IANS