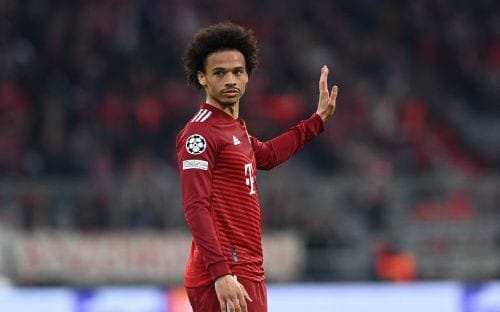 Berlin: A superb performance from Leroy Sane propelled Bayern Munich to a 2-0 Champions League win at Inter Milan in their first group game on Wednesday.

Sane scored a first-half opener and the German's attempted pass was turned into his own net by Inter defender Danilo D'Ambrosio in the second period.

Bayern coach Julian Nagelsmann, who criticised his side's intensity after their 1-1 draw at Union Berlin last weekend, said his team "showed their desire" to compete.

"The energy was good and the desire of everyone was very good," Nagelsmann told DAZN.

"We scored too few goals, but we deserved to win. We played quite maturely, but (the game) could have been decided earlier."

Bayern started furiously, with Thomas Mueller -- the only survivor from Inter's 2-0 win over Bayern in the 2010 Champions League final in Madrid -- forcing a fingertip save from home goalkeeper Andre Onana.

Sane broke the deadlock in the 25th minute when he controlled a long pass from Joshua Kimmich, before rounding Onana and rolling the ball into the net.

"I saw the space and knew they were high and had gaps. Jo (Kimmich) saw me super well, that was a super ball from him," Sane said.

"Ultimately, I just wanted to play a good game, have a good feeling and leave the field happy."

Inter's German wing-back Robin Gosens lamented Sane's goal, saying: "We conceded from a long ball -- that's exactly what we talked about before (the game)."

Inter started the second half the better of the two teams and almost equalised through D'Ambrosio, but the Italian blazed a rushed shot over Manuel Neuer's crossbar.

Bayern began to turn the screw as the second half continued, with Sane and French forward Kingsley Coman combining in the penalty area.

Sane tried to square a pass to Sadio Mane, but D'Ambrosio intervened, bundling the ball over the line.

"We were up against a very intense, extraordinary side, one of the best in Europe right now," Inter coach Simone Inzaghi told Sky Sport Italia.

"(We) had opportunities to get back into it, but you need a perfect performance against a side on this level and we didn't do that."

Bayern defender Matthijs de Ligt, who moved from Serie A side Juventus to Munich in the summer, said training is more intense in Germany.

"Both training regimes are hard, but in Italy it's more about tactics and systems, less intensity and above all less sprinting."

Bayern welcome Lewandowski back to Munich next Tuesday when they face Barca, with Nagelsmann looking forward to renewing acquaintances with the player who left Munich in the close season.

"I am looking forward to (seeing) Robert, not necessarily as an opponent because he's very good, but as a person," he said.

"It will be an exciting game... they are very strong again and have started well in the league."