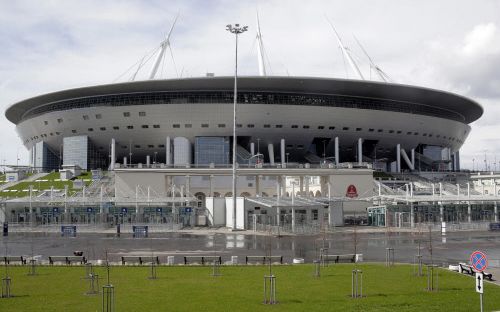 Officials at European football's governing body have been holding discussions on the impact of Russia's deepening intervention in Ukraine on whether the Champions League final can still be staged in St. Petersburg.

The showpiece game in European football is due to be played in the Russian city on May 28, the biggest sporting event in the country since the 2018 World Cup.

UEFA hasn't issued a fresh statement since fears were raised of a fuller Russian invasion of Ukraine after Moscow announced on Monday that its recognition of independence for areas in eastern Ukraine extends to territory currently held by Ukrainian forces.

UEFA said over the weekend that it was “constantly and closely monitoring the situation" and had no plans to change the final venue. But a person with knowledge of the situation said the Ukraine crisis was discussed by top-level officials at UEFA on Tuesday, including its president, Aleksander Ceferin. The person spoke on condition of anonymity to discuss talks assessing the geopolitical situation.

British Prime Minister Boris Johnson indicated in the House of Commons that Russia shouldn't be holding such a competition.

Johnson warned of “a Russia that is more isolated. A Russia that has pariah status ... no chance of holding football tournaments in a Russia that invades sovereign countries."

UEFA has had to move the Champions League final in the last two seasons, both times from Turkey to Portugal due to the pandemic. A full-scale Russian invasion of Ukraine would significantly change UEFA's belief the final could still be played in St. Petersburg.

With four representatives in the last 16, England has the most teams remaining in the Champions League. Tom Tugendhat, chairman of the British parliament's foreign affairs committee at the House of Commons, has called for UEFA to take the final off Russia.

“This is a shameful decision,” Tugendhat tweeted. "UEFA should not be providing cover to a violent dictatorship.

Russian officials haven’t yet acknowledged any troop deployments to the rebel east, but Vladislav Brig, a member of the separatist local council in Donetsk, told reporters that the Russian troops already had moved in, taking up positions in the region’s north and west.

UEFA has been keeping Ukrainian and Russian teams separated in draws to prevent them from playing each other since Moscow annexed the Crimea peninsula of Ukraine and backed separatist insurgents in eastern Ukraine.

Russia’s state gas company, Gazprom, has been a sponsor of the Champions League since 2012 — the same year Ukraine co-hosted the European Championship with Russia. But the company's logos were removed from a UEFA-branded “Champions Festival” on Kyiv’s main street when the Ukrainian capital staged the 2018 Champions League final between Real Madrid and Liverpool.