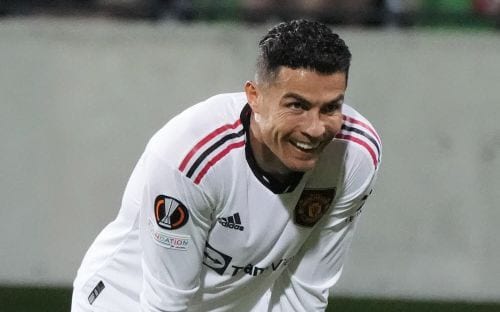 London: Cristiano Ronaldo scored for the first time this season as Manchester United got their Europa League campaign back on track with a 2-0 win at Sheriff Tiraspol on Thursday.

Ronaldo had gone seven games without a goal this term before the United striker converted a first half penalty against the Moldovan champions.

It was the 37-year-old's 699th club goal, but Ronaldo's low-key celebration was in keeping with the comfortable nature of United's third successive away victory.

This was the kind of unglamourous fixture Ronaldo seemed desperate to avoid when he launched his unsuccessful bid to quit Old Trafford for a Champions League club in the summer.

But the Portugal star will be relieved to have got on the scoresheet, after Jadon Sancho put United ahead with a well-timed response on the day he was left out of the England squad.

Ronaldo missed United's pre-season tour for "family reasons" and, while Ten Hag was pleased with his contribution against Sheriff, he says the forward needs more work to reach peak fitness.

"We could expect this when you miss pre-season so he has to work really hard and invest to get the right fitness then he will score more goals," United boss Erik ten Hag said.

"You can see he is really close and when he gets fitter he will finish them. I think he is totally committed to this project and to this team.

"He needed that goal. He was close many times. You see connections coming around him.

"We're happy for him and the team wanted him to bring the goal, so that's good."

That gave Ten Hag's men no margin for error in Chisinau and they were up to the task against a Sheriff side who beat Real Madrid in the Champions League group stage last season.

United's first trip to the far-flung outpost of Moldova served as a painful reminder of their diminished status following last season's failure to qualify for the Champions League.

But, showing respect for Sheriff, Ten Hag named a strong side and Sancho, one of five changes, struck with United's first meaningful attack in the 17th minute.

Taking Christian Eriksen's pass in his stride, Sancho cleverly switched direction inside the Sheriff area, giving himself room to plant a cool finish into the bottom corner from 12 yards.

Ronaldo doubled United's lead in the 39th minute, easily stroking in his spot-kick after Diogo Dalot was brought down by Patrick Kpozo.

Andrea Belotti scored his first Roma goal to cap their 3-0 win against 10-man HJK Helsinki at the Stadio Olimpico.

Jose Mourinho's side suffered a shock 2-1 loss against Ludogorets in their Group C opener, but they were always in control after HJK captain Miro Tenho was sent off in the 15th minute for a professional foul on Belotti.

Paulo Dybala took just 69 seconds to break the deadlock after coming on at half-time as he fired home from the edge of the area.

Lorenzo Pellegrini chested in the second goal after 49 minutes, with former Torino forward Belotti tapping home in the 68th minute.

In Group A, Bodo/Glimt beat FC Zurich 2-1 to take top spot with Arsenal's game against PSV Eindhoven postponed after the death of Queen Elizabeth II.

In Group F, Midtjylland powered to a stunning 5-1 rout of Lazio, while Feyenoord's Iran winger Alireza Jahanbakhsh hit a hat-trick in their 6-0 demolition of Sturm Graz. AFP

Ronaldo starts for Portugal against Ghana in his fifth World Cup