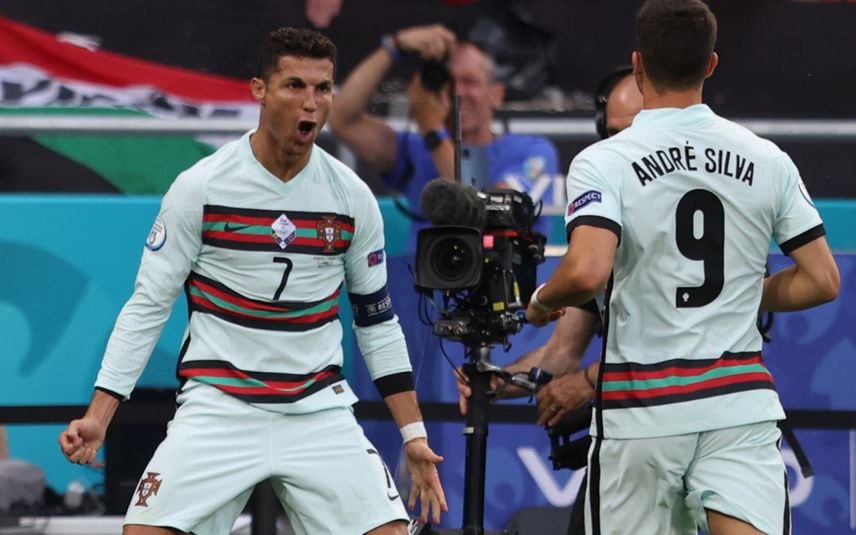 Another day and another record for Cristiano Ronaldo. Just when the sands of time appear as though they are running out on the Portugal forward, he scores two late goals in a 3-0 Euro 2020 win against Hungary on Tuesday to remind the world that he still retains the incredible ability to put the clock on hold and deliver when his team needs him the most.

The 36-year-old is now the all-time leading goal scorer in European Championship finals after his two goals in Budapest -- an 87th-minute penalty and a close-range strike two minutes into stoppage time -- took him to 11, two clear of former France captain Michel Platini, and he extended his remarkable run of scoring in 11 consecutive international tournaments, stretching back to his first, at Euro 2004.

Ronaldo is also now just three goals short of moving level with former Iran striker Ali Daei (who scored 109 between 1993 and 2006) as the leading scorer in the history of international men's football.

In the immediate term, his two goals in the Puskas Stadium, which was full of raucous noise and atmosphere in a 60,000-capacity crowd, proved decisive not only in confirming victory for the reigning European champions, but also in giving Fernando Santos' team a potentially crucial three-goal winning margin that could give Portugal an advantage over France and Germany if goal difference matters when the qualification slots are finalised in Group F.

From a team perspective, Ronaldo's contribution was important for that reason. Until Raphael Guerreiro opened the scoring with a deflected opener on 84 minutes, it looked set to be a frustrating day for Portugal and Ronaldo.

But as has happened so often since his first international goal, against Greece in the opening game of Euro 2004, Ronaldo turned up in the closing stages to make sure the job got done. That in itself is a testament to Ronaldo's supreme fitness and determination.

Almost 19 years after making his debut for Sporting Lisbon, it is a mark of the Juventus forward's enduring greatness that he is still pushing himself to score in the final moments when most players are feeling the physical effects of a draining 90 minutes. Ronaldo is a peerless example to his teammates and to footballers across the globe because his enthusiasm and desire remain as intense as when he first started out as a teenager.

But having broken yet another record, the reality of Ronaldo is that both he and those who watch him will be wondering how long it will be before he breaks another one. The priority for Ronaldo will surely be to inspire Portugal to back-to-back Euro titles, especially after an injury early in the 2016 final against France forced him to watch his country win their first-ever international tournament from the sidelines. But he will also be desperate to eclipse Daei before the end of Euro 2020 and place himself ahead of everyone else at the summit of men's international goal scoring.

If Ronaldo is able to do that in the weeks ahead, he will have to defy time and logic once again because, while his goal record is something to behold, there is a distinct drop-off when it comes to scoring against the top international teams. His next two appearances, fitness permitting, will be against Germany and France in Group F, and Ronaldo has never scored against either of them in 10 games during his career. Italy and England, two of the teams Portugal could face on the way to the final, have also never conceded a Ronaldo goal.

Not since he scored a hat trick against Spain at Russia 2018 has Ronaldo scored against an elite nation. You then have to go back to a goal scored in a 2-1 defeat against Argentina in February 2011 for the only other time that Ronaldo has scored against a nation that has won the World Cup. Ronaldo scored 14 goals in 10 internationals in 2019, but in 12 games for Portugal since then, his tally is just seven goals, including those against Hungary.

The question now is whether his double in Budapest will trigger another goal surge that sees him break his duck against France and Germany and go on to take Daei's record during the tournament. Or will it go the other way, with his late show in the Hungarian capital proving to be little more than a final burst of light before the star begins to fade?

His performance against Hungary was mixed, but two goals at the end of it certainly take away the need for closer scrutiny. After all, Ronaldo is there to score goals and he did that twice.

He missed a glorious chance to score late in the first half when he shot over the bar from 6 yards, and he failed to connect cleanly with a close-range volley earlier in the game. But despite the hits and misses, he was still Portugal's most threatening forward -- Bruno Fernandes, Diogo Jota and Bernardo Silva struggled to make an impact and all three were substituted -- and there is no question that his sheer presence motivates his teammates, and frightens the opposition, because everyone on the pitch knows that he remains capable of that one moment of magic that makes all the difference.

He made himself the headline-grabbing poster boy yet again, but he is now facing a serious jump in class against Germany and France. Still, it would be typical of Ronaldo to become men's football's all-time leading international scorer with goals against two of the most formidable nations in the game.

His tale of the tape suggests that might be beyond him, but if Ronaldo has taught us anything over the years, it is that he, more than anyone else, decides the headlines when he plays. ESPN