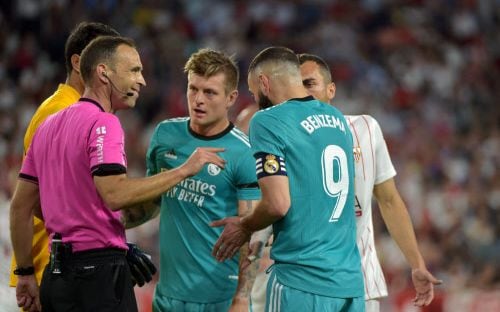 Madrid: Karim Benzema completed another incredible Real Madrid comeback on Sunday as they fought from two goals down to defeat Sevilla 3-2 in La Liga.

After trailing Chelsea 3-0 on Tuesday only to secure their place in the Champions League semi-finals, Madrid stunned Sevilla to seal the victory that has surely won them La Liga.

Defeat would have given fresh hope to the chasing pack, with Sevilla and Barcelona both beginning the day 12 points behind, Barca with two games in hand.

Instead, goals in the second half from Rodrygo, Nacho Fernandez and Benzema in the 92nd minute mean Madrid extend their advantage to 15 points with six games left to play.

An Ivan Rakitic free-kick and Erik Lamela's smart finish had put Sevilla two up at the Ramon Sanchez Pizjuan.

"It's difficult to understand why we played like that in the first half and to be honest how we played as well as that in the second," said Carlo Ancelotti.

"In the first half we looked tired. In the second, the intensity was spectacular."

Benzema's goal finished Chelsea off on Tuesday after Rodrygo had forced extra-time at the Santiago Bernabeu and those two, along with Vinicius Junior, were crucial again.

Rakitic gave Sevilla the lead in the 25th minute, curling a free-kick into the corner after Luka Modric had brought down Papu Gomez.

But a superb Vinicius backheel for Dani Carvajal allowed Rodrygo to pull a goal back in the 50th minute.

Vinicius thought he had made it 2-2 in the 74th minute, only for the goal to be ruled out, the referee deciding the Brazilian had controlled with his arm and not his chest.

Madrid though were undeterred as Rakitic headed away a corner, only for Carvajal to drive to the line and pull back for Nacho to finish.

And then in the 92nd minute, Benzema completed another remarkable revival, collecting Rodrygo's pass, controlling and firing past three Sevilla defenders on the line.

Ten-man Atletico Madrid left it late too as Yannick Carrasco scored the winning penalty with the last kick of the game for a 2-1 win over Espanyol.

Atletico looked set to drop another two points at the Wanda Metropolitano when Geoffrey Kondogbia was sent off in the second half and then three minutes later Raul de Tomas cancelled out Carrasco's opener, his free-kick squirming through the fingers of Jan Oblak.

But De Tomas handballed deep into added time, the referee awarding the spot-kick after a long consultation with VAR, before Carrasco held his nerve. The ball hit the net with the clock approaching 100 minutes.

"It was an important game for us and when you score with the last kick of the game it feels even more important to achieve our goal this season," Carrasco said.

After losing away at Mallorca last weekend and then being knocked out of the Champions League by Manchester City in midweek, Diego Simeone's side could ill-afford another dent to their morale.

The significance of the win was demonstrated by the Argentinian celebrating Carrasco's winning penalty by sprinting down the touchline, before joining his relieved players in the corner.

Atletico cut Espanyol open in the 52nd minute as Matheus Cunha, on at half-time, slipped in Carrasco, who turned inside and drove through Diego Lopez at the near post.

But the game turned in Espanyol's favour in the 71st minute when Kondogbia was shown a second yellow card for blocking Sergi Darder's shot with his hand and then from the resulting free-kick, De Tomas equalised.

The usually reliable Oblak was at fault as the goalkeeper fumbled a simple save, the ball hitting the post and dribbling in.

With a man extra, Espanyol wanted a winner but Atletico found a way back.

In the 95th minute, De Tomas went to clear Antoine Griezmann's flicked header but got his angles wrong and instead the ball caught his elbow.

In the 100th minute, Carrasco made no mistake. AFP

I League: RoundGlass Punjab edge past Gokulam Kerala by 1-0

Random Covid testing for returnees to India from Dec 24